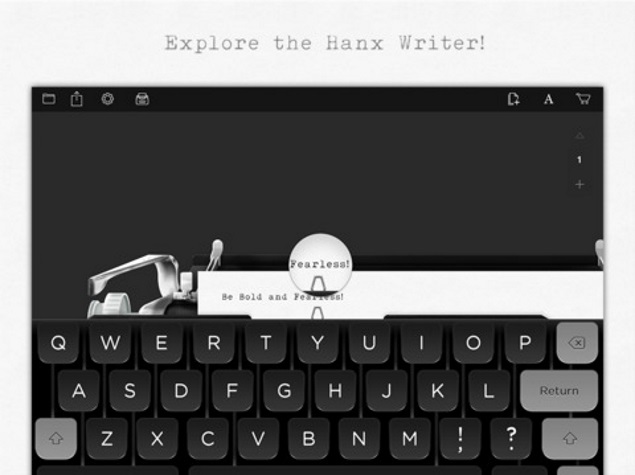 "I wanted to have the sensation of an old manual typewriter - I wanted the sound of typing if nothing else...cause I find it's like music that spurs along the creative urge. Bang bang clack-clack-clack puckapuckapuckapucka... I wanted the 'report' of each letter, each line," Hank wrote on Twitter.

When you start the app for the first time, you'll see a note from Hanks, where he describes buying his first typewriter in the 70 and the tactile joy of using the typing device that our younger audience may have never seen. Hanks, himself a collector of typewriters, owns around 200 portable typewriters, he revealed in an interview with American talk show host Kelly Ripa.

Hanx Writer is, by modern standards, a terrible word-processor. To make the app authentic, there's no auto-capitalisation, auto punctuation or any other modern convenience. Instead, the app shows a large typewriter style keyboard, some paper, and lets you type with a wonderfully smooth animation showing the letters strike the page. All this, with a very satisfying clicking noise, and the joyous ding as you hit the end of a line - very retro indeed!

Instead of being able to copy-paste and move around large pieces of text, you really do feel like you're writing on a typewriter, and since you can't split the keyboard the way you can the iOS keyboard, thumb-typing isn't an option either. To use the Hanx Writer for actual work is a bad idea unless you have a Bluetooth keyboard paired to the iPad, but if you're not in a rush, then the app is actually pretty amazing to write with.