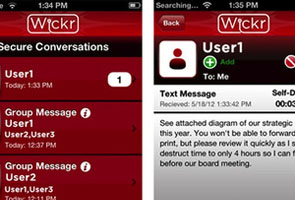 Celebrity scandals fuelled by leaked text messages or emailed images inspired a new application to give users of Apple gadgets uncrackable communications that can be made to self-destruct.

The Wickr app has been downloaded thousands of times since the software crafted for iPhones, iPads, and iPod touch devices hit the virtual shelves of Apple's online App Store on Wednesday.

The San Francisco-based startup behind the software is working on versions of Wickr for smartphones or tablets powered by Google-backed Android software.

"We think communications should be flipped on its head," said startup co-founder Nico Sell, a key behind-the-scenes figure at the infamous Def Con hacker gathering that takes place annually in Las Vegas.

Wickr was billed as a secure social network where people could send text or voice messages as well as pictures or snippets of video with security in place to thwart snoops.

Wickr encrypts files end-to-end and, unlike typical email services, so no copies are left to linger on computer servers used to route messages.

Wickr messages and their contents are set to self-destruct, with senders getting to decide how long files continue to exist after being opened.

"After you view a message or picture, the application erases the forensics on the phone so no one could go back and find a trace of that," said co-founder Robert Statica, an engineering professor specialising security technology.

"If someone wants to recover the data forensically, all they will get is garbage."

Statica, who teaches at the New Jersey Institute of Technology, was at a San Francisco cafe with Sell last year when talk turned to headline-grabbing stories about athletes or film stars vexed by exposed text or email messages.

"We were laughing so hard that we almost got kicked out of the cafe," Statica recalled. "Before we left, we decided that (Wickr) was the way to go."

Versions of Wickr are being developed for laptop and desktop computers and as Web browser "plug-ins" to augment popular email programs such as Gmail or Outlook with the security features.

"The most secure file you can have is a file that doesn't exist," Statica said. "That is the point from which we designed all these things."

Lawyers, doctors and others with professions inclined toward sensitive communications have shown strong interest in Wickr, according to the startup.

"We are already one of the most popular social media apps," Sell told AFP on Friday.

The startup's plan was to always offer a free version of Wickr unencumbered by ads and rely on making money from users willing to pay for a premium version of the service with enhanced features.

Wickr rolled out globally but in some countries, such as France, it was awaiting licensing required when implementing encryption software, according to Statica.

More information about the application was available online at mywickr.com.