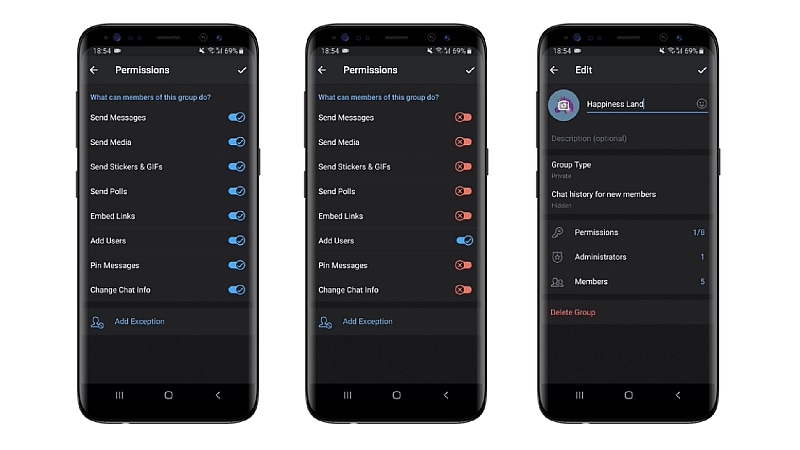 Telegram has announced version 5.2 that brings group permissions. The latest Telegram update also includes the ability to undo accidentally deleted chats. Telegram has additionally expanded the total number of members in a group from the existing 100,000 members to up to 200,000 members. There is also an option to sort your contacts on the Telegram app by name and by last seen time. Telegram for iOS has also received upgraded search bars, while its Android version now asks users to set up a profile picture while creating an account.

Among other new changes, Telegram version 5.2 has added group permissions that essentially enable admins to restrict all members from posting any particular content. The app now also allows group admins to completely restrict members from sending messages. This sounds similar to how WhatsApp has offered group controls on its platform since June last year. Moreover, Telegram Desktop has also got the new group permissions feature.

Telegram has also doubled the member limit of groups from the existing 100,000 members to 200,000 members. The messaging app notably brought supergroups with a capacity of 1,000 members back in November 2015. However, it has now mingled supergroups and basic groups simply into "groups".

In the list of new changes specifically for groups, Telegram has also streamlined all group interfaces, including the Settings screens, Admin panels, and Member lists.

Telegram has also added the ability to undo clearing history and deleting chats within five seconds. This is helpful if you've accidentally deleted any chats. Further, there is the option to sort your contacts on Telegram by name and by last seen time. This new addition works on both Android and iOS.

New download and uploading animations on Telegram have also been added. Similarly, there is an obscure blur instead of an empty square for all the photos that are yet to be downloaded from the app. Search bars on Telegram for iOS and the default dark theme on its Android counterpart have also been enhanced. The Android app now also allows users to set up a profile picture while creating an account.

Besides, Telegram has brought the Telegram Desktop version 1.5.8 with support for automatically downloading files and music and choosing input and output devices for Telegram Calls. There is also the option to choose your emoji set.