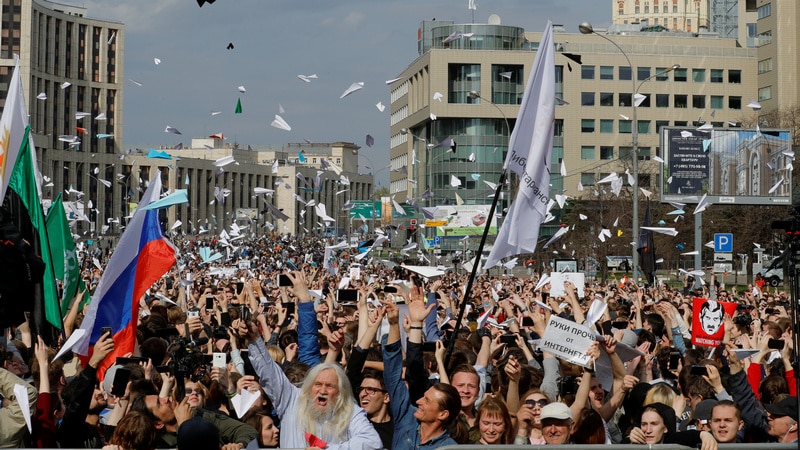 Thousands rallied in Moscow on Monday in support of Internet freedom after Russian authorities tried to block access to the popular messaging app Telegram in the latest onslaught against dissent under Vladimir Putin.

In an unusually strong turnout, around 10,000 people including top opposition leader Alexei Navalny turned up in the centre of the Russian capital, many holding placards and shooting paper airplanes, the Telegram symbol.

Many called for Putin's resignation.

"Big moron is not blocking you", read one sign making light of the botched effort by authorities to block the Telegram messaging service in Russia.

Some in the mostly young crowd chanted "Don't stay silent" and "Putin is a thief."

Protesters said they did not want the state to tell them what to read online.

"Everyone needs to have a choice," Tatyana Filatova, a retiree, told AFP.

"When we live in accordance with a strict set of rules, life becomes boring and the sky grey."

'Down with the tsar'
Navalny addressed the huge crowd from the stage, urging it to resist the authorities he called "swindlers and thieves".

"I will not put up with this silently," he bellowed into the microphone.

"Will you put up with this?" he asked the demonstrators.

"No," they roared back, chanting "Down with the tsar!"

Under Putin, who was re-elected for a fourth Kremlin term last month, top television channels and most newspapers have been muzzled, with Internet remaining the only public venue for free self-expression.

But over the past months the authorities have moved in on the Russian Internet, with the telecoms watchdog saying Facebook could also be blocked if it did not comply with local legislation.

Navalny has called on Russians to stage a major rally on Moscow's main avenue on Saturday, two days before Putin's swearing-in ceremony.

The authorities warned Navalny against staging the unpermitted rally in the heart of Moscow.

Earlier this month a court ruled to block Telegram in Russia after it refused to give state security services access to private conversations that are normally encrypted.

But in seeking to deny access to Telegram, the state telecoms regulator blocked millions of IP addresses, disrupting the work of many businesses including car manufacturer Volvo.

Roskomnadzor has failed to fully block Telegram, with Russians turning to VPNs and proxies to bypass the ban.

'Historic chance'
"Your energy is changing the world," Telegram's maverick founder Pavel Durov wrote on VKontakte, the Russian version of Facebook which he founded, addressing the protesters.

Ahead of the rally he said Russians had a "historic chance" to prevent the onset of full-blown Internet censorship in Russia.

"Russia is at a crossroads - full-scale censorship has not been introduced yet," the 33-year-old said. "Without action Russia will lose Telegram and other popular services."

Facebook and Telegram are widely used by the opposition to coordinate protests and make political statements.

It is seen as putting the information at risk of being accessed by Russian intelligence services.

Telegram, a free application that lets people exchange messages, stickers, photos and videos, has attracted more than 200 million users since its launch by Russia's Durov and his brother Nikolai in 2013.