Telegram’s group video calls can have up to 30 participants initially. 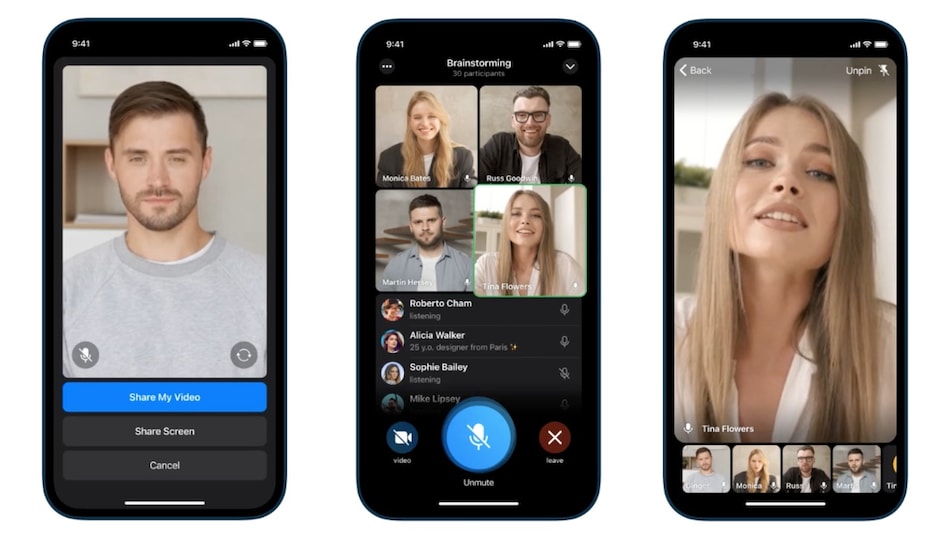 Telegram has finally introduced group video calls — over a year after initially announcing its arrival. Users across mobile devices, tablets, and desktops can utilise the update to transform their group audio chats into video conference calls. The new move by the London-based instant messaging app takes on the likes of Facebook Messenger, WhatsApp, and Apple's FaceTime. In addition to group video calls, Telegram has brought a handful of interface-level changes through the latest update. These changes include the addition of animated backgrounds, new message sending animations, and new animated emoji. The updated Telegram also includes a special menu button for bots.

The most significant change that Telegram brings through the update is the ability to let users convert their group audio conversations into video calls. Users just need to tap the camera icon in a group audio call to switch their video on. Once enabled, you can pin one of your group members to see their video on the front. Telegram has also provided the option to share your screen and even both your camera feed and screen simultaneously.

Users on tablets and desktops get additional support during video calls, where they can open the side panel and see a split-screen view of the video grid and list of participants. It will be optimised for both portrait and landscape orientation, Telegram said in a blogpost.

On desktops, users will also have the ability for selective screensharing. This means that users can broadcast only an individual program during their group video calls, instead of showing the rest of the participants the entire screen. This is similar to how you can share a particular screen from your desktop when using Zoom.

Desktop users will also get members pinned automatically when they share their screen. Further, voice chats will be available on desktops in a separate window to let users type and talk without leaving their other important tasks.

Telegram now also allows users to make group voice calls with an unlimited number of participants. However, the option to make group video calls is currently limited to the first 30 people joining a conversation on the platform. This simply means that you can't add more than 29 members to your group video calls on Telegram. But nonetheless, Telegram has promised to increase that limit soon.

In April last year, Telegram first announced its plans to bring group video calls to the platform. CEO Pavel Durov in April this year said that the new option would be available as early as May. However, it has now finally been launched for both mobile and desktop users.

Unlike Telegram, WhatsApp has had group video calling support for quite some time. Telegram users have, however, received the feature with enhancements including screensharing to give them an edge over WhatsApp, the world's leading messaging app. Facebook introduced screen sharing to its Messenger app last year.

Telegram has also brought some new, interface-level changes as a part of its latest update. These changes include animated backgrounds that have multi-colour gradient wallpapers, which are generated algorithmically and move each time when you send a message. You can also create your own animated backgrounds by selecting multiple colours and patterns. Once created, you can share your backgrounds with your contacts.

The update has also enabled animation effects that appear when you send a message. You will also notice new animation effects when sending media files through Telegram. Further, iOS users have received two new gradient app icons that are available for access through Settings > Appearance in the app.

Users who often use stickers and emojis in communication have also been considered, as the update allows them to import stickers and brings new animated emoji.

For iOS devices, there is also a new login reminder that will appear in Settings that lets you quickly update your phone number. Android users will get a similar login reminder in the next update.

Telegram's latest update has also introduced a menu button specifically for bots where users can browse and send commands with a single tap, instead of typing commands in the textbox.

You can get the updated Telegram on your device by downloading its latest version. It is available for download on iOS through the App Store and Android via Google Play store. Desktop users can also download the update directly from the Telegram site.