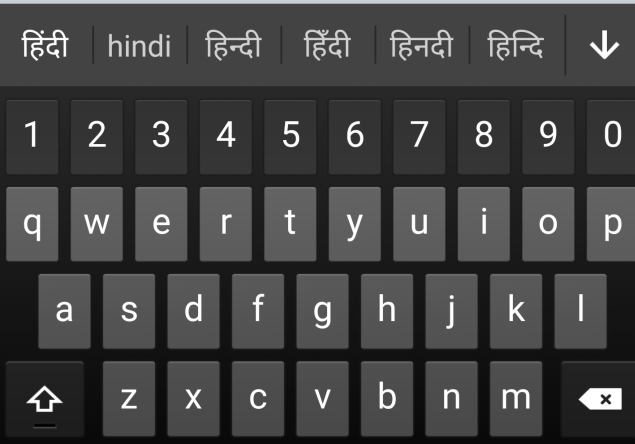 Mobile keyboard firm SwiftKey showed NDTV Gadgets an early glimpse of its transliteration keyboard with prediction. SwiftKey has already launched predictive keyboards in English and most Indian languages, but the company did not offer transliteration before.

If you're not comfortable with typing in Hindi, then typing on a Hindi keyboard can be challenging, as you try and locate the vowels and consonants on non-standardised layouts.

Google's Hindi Input keyboard for Android solves this for many people, as it allows you to type phonetically using the English letters - jo dekhna chahte ho, aise likho, and you'll see the Hindi words appear on screen.

Google's keyboard works really well to let you type quickly, and the auto-correct bar above the keyboard lets you quickly find the exact word you were looking for, but the keyboard is limited in a number of ways. For one thing, it lacks many modern features that we have come to take for granted on English keyboards, such as next word prediction and swipe to type.

(Also see: Indian Users the Most Engaged but Least Likely to Pay: SwiftKey)

Typing in namaste works exactly like the Google Hindi Input tool - you type in the Roman script, and see नमस्ते rendered. What stood out is the fact that the word suggestions included the word in both scripts, and there were also next word predictions. You could type one word and then tap out the next few common words - the suggestions came in both the Roman and Devanagri script. This allows you to quickly move from typing in English to Hinglish to Hindi, and what's really interesting is that the keyboard remembers your typing choices. So you could easily type something like Mera India महान without breaking a sweat.

Predictive keyboards typically offer word suggestions based on what they've learned about your usage. The SwiftKey prototype we saw goes a step further, and picks the script to offer suggestions in based on your past usage too - so if you prefer to type a particular word in Hinglish and another in Hindi, the predictions will be tailored accordingly. And, according to SwiftKey, this new keyboard will not just support Hindi transliteration, but most major Indian languages.

According to the company, this update will only arrive later in 2015, but the prototype we saw in action is already quite impressive. SwiftKey's forthcoming keyboards should definitely lead to more typing in India languages. The transliteration keyboards won't be a gamechanger if you're more comfortable typing in Indian languages than in English. However, if you need to enter text in Indian languages but aren't used to typing on an Indic keyboard, this could be a huge step up.

Samsung to Use $56 Billion Cash Pile for Growth, Including Acquisitions
Microsoft Says All Windows Phone 8.1 Devices to Get Lumia Denim Update This Month