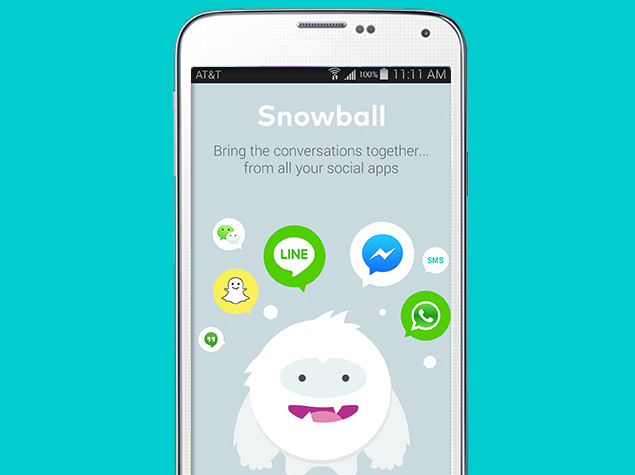 Messaging apps are among the most popular apps on both Android and iOS. Check the top apps in either app store and you'll come across several messaging apps. While different messaging apps serve different audiences and, sometimes, a different purpose, it can get tiresome to have multiple chat apps on your smartphone.

Google Ventures funded app Snowball tries to solve that problem by unifying popular messaging services, by letting users access multiple services at once. At launch, it supports SMS, WhatsApp, Facebook Messenger, Google Hangouts, Twitter, Line, WeChat, Snapchat, and Slack. It acts as an inbox for notifications from all these apps. The app uses chat heads for notifications, similar to the pop-ups Facebook Messenger shows on the Android home screen.

Snowball is one of the few apps that went Android first. This is because iOS doesn't allow third-party apps to integrate deeply with the system. Snowball doesn't rely on authentication from each messaging app it supports, but integrates with Android notifications to pull show new messages on the home screen.

In a blog post on Medium, Snowball founder Anish Acharya wrote, "Our conversations are spread across more apps than ever: my fiancé only uses SMS and my co-founder uses WhatsApp. My sisters are into Facebook Messenger and I'm pretty sure our office dog Luna prefers Line, though I haven't yet found a way to confirm."

Highlighting the fact that the idea behind the app was to unify the messaging experience, Acharya wrote, "We built Snowball to bring these conversations together; one place for all of the messages from all of the social apps you already love. We didn't want another social app, we wanted a way for all of our existing social apps to work better together."

Snowball is available via Google Play. At the time of filing this report, it wasn't available for download in India.