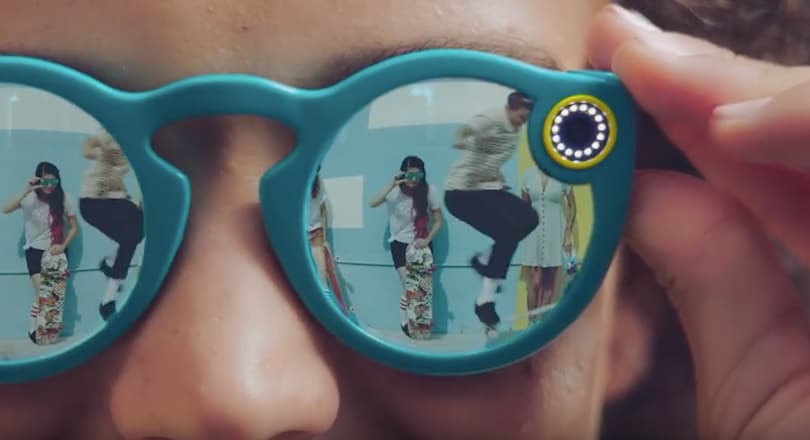 Snapchat announced overnight Friday that it is going to start selling sunglasses with cameras in them - they're called Spectacles - and that the company name is now Snap Inc.

Snapchat, the app, will remain Snapchat, chief executive Evan Spiegel said in a blog post announcing the change. The name now refers specifically to the social network, which is now not the only product the company, Snap, makes, because now Snapch - I mean, Snap Inc., sells glasses. "You can search Snapchat or Spectacles for the fun stuff and leave Snap Inc. for the Wall Street crowd :)," he wrote.

Spiegel revealed the glasses to a Wall Street Journal reporter, who wrote that the CEO literally covered the glasses with a towel before uncovering it like an excited magician, to reveal to him the company's first hardware product. "Boom!" he said to the reporter, who broke the news of the coming Spectacles on Friday night.

So what are these glasses? Well. Here's what we know.

How do they work?
Spectacles are sunglasses with a camera, essentially. They record videos up to 10 seconds in length with a push of a button on the top left-hand corner of the frames (see image above). If you tap the button twice, it'll record for up to 30 seconds. Little lights on the inside and outside of the frames alert the wearer and anyone around them that the camera is recording, Snap officials said.

The snaps can then transfer to your Snapchat memories (over WiFi or Bluetooth, depending on your device) to a nearby phone. Or you can save them on the Spectacles until you're near a phone.

(Also see: Snapchat Memories Will Let You Save Photos, Videos)

What do the videos look like?
They are circular! Which is also new! The circular videos should play full screen with the phone oriented in any direction, Snap officials said - the theory of which is demonstrated on the company's promo video for the glasses.

How much? What comes with them?
They will cost $129.99 when they go on sale later this fall (which is a weird time to start selling sunglasses, no?). The company warns that they'll be available only in limited quantities, in three different colors. They come with a charging apparatus, and the company says they hold a charge for about a day.

Why?
We'll defer to the Wall Street Journal reporter, who asked Spiegel this question:

"The images that result are fundamentally different. Spectacles' camera uses a 115-degree-angle lens, wider than a typical smartphone's and much closer to the eyes' natural field of view. The video it records is circular, more like human vision. (Spiegel argues that rectangles are an unnecessary vestige of printing photos on sheets of paper.) As you record, your hands are free to pet dogs, hug babies or flail around at a concert. You can reach your arms out to people you're filming, instead of holding your phone up, as Spiegel describes it, 'like a wall in front of your face.'"

Are they cool?
Man, I don't know. Ask a teen. I'm not cool, and I haven't seen these glasses in person.