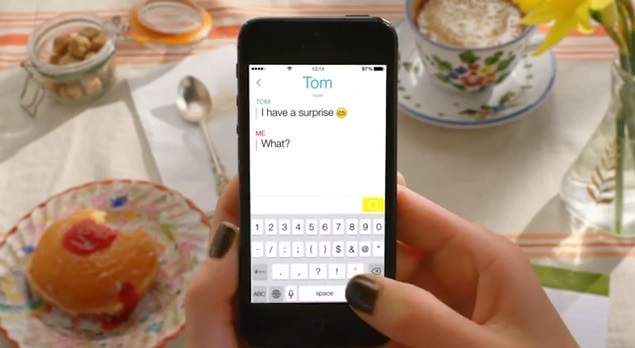 However, the new text chats on Snapchat, unlike other social platforms, give more options for private conversations while retaining the service's famous ephemeral photo feature. The new feature will allow Snapchatters, a term used for Snapchat users, to chat with friends by swiping the name in the inbox. Once the chat screen is closed, the conversation and images shared will be deleted. Snapchat however has confirmed that users have an option to manually save an important stuff in the chat by tapping or taking screenshot.

Further, the popular image sharing service has added video calls. Snapchat will now automatically inform users when a friend is 'Here' (available) in chat. Users can then press and hold the video chat button to initiate live video calls.

Snapchat announced the news on its blog post and said, "We built Stories to help Snapchatters create narratives and share them with all of their friends in just one tap. But until today, we felt that Snapchat was missing an important part of conversation: presence. There's nothing like knowing you have the full attention of your friend while you're chatting. We could not be more thrilled to announce Chat. Swipe right on a friend's name in your Snapchat inbox to start chatting. When you leave the chat screen, messages viewed by both (you and your friend) will be cleared - but either of you can always tap or screenshot to save anything you'd like to keep (addresses, to-do lists, etc.)!"

For those unaware, Snapchat is a photo messaging app which can be used for taking photos, recording videos, adding text and drawings, and sending them privately. The app is different from most messaging apps in that users can set a time limit for how long recipients can view their 'snaps', after which they will be hidden from the recipient's device and deleted from Snapchat's servers, making it an ideal 'sexting' app.

Intel to invest $6 billion to upgrade Israel production line: Minister
Ubuntu for Android is no longer under active development: Canonical