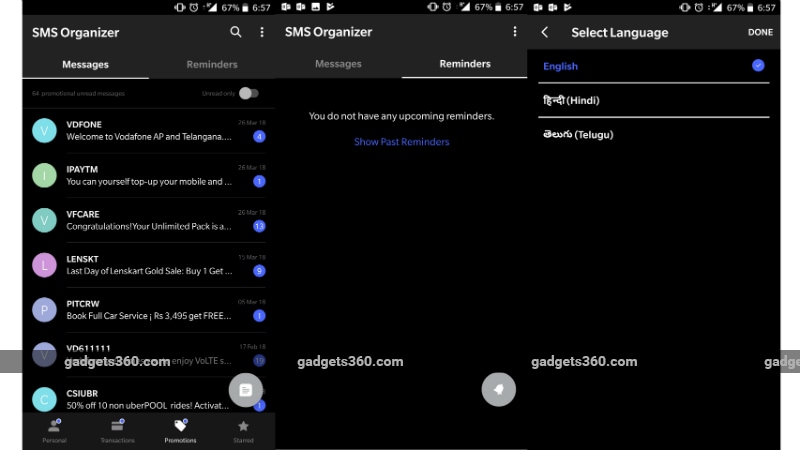 SMS Organizer is one of Microsoft's most popular apps on Android. The app was created as part of Microsoft Garage, the company's platform for experimental projects, and is exclusive to India. It was launched with the 'beta' moniker on Google Play, but has a separate beta testing programme. In its latest beta update, the SMS manager app has got a few new features such as a darker user interface, and support for Hindi and Telugu. To see these these features, you will need to sign up for the beta programme by accessing this link and clicking on Become A Tester. You will then see an update on the app's Google Play listing.

Talking about changes to UI in the latest beta update to Microsoft SMS Organizer, the interface now gets a black-coloured tint compared to the previously available dark blue tint in the dark mode. This is aimed at offering an aesthetically pleasing experience for the app's users. Apart from that, support for Hindi and Telugu has also been rolled out in testing. The new beta features were first spotted by OnMSFT. Gadgets 360 recently learnt that more Indian languages will be added to the app soon.

To recap, SMS Organizer uses machine learning to identify the type of SMS messages you receive on your Android smartphone. The app classifies them on the basis of priority. For instance, the app will identify whether the SMS has been received from an important source or is promotional in nature. Additionally, the app lets you set up reminders for things like movie bookings and train timings by scanning through the text in the received SMS messages. SMS Organizer can be used only when the user has an Indian mobile number as it requires to input a One Time Password (OTP) for verification. However, SMS Organizer's team has mentioned that a global rollout is on its radar.

At an event held in Hyderabad late last month, Microsoft Garage announced its sixth facility in the country. Jeff Ramos, Partner Director, Microsoft Garage, also stated that India's second Garage will be opened up in Bengaluru in this calendar year itself.