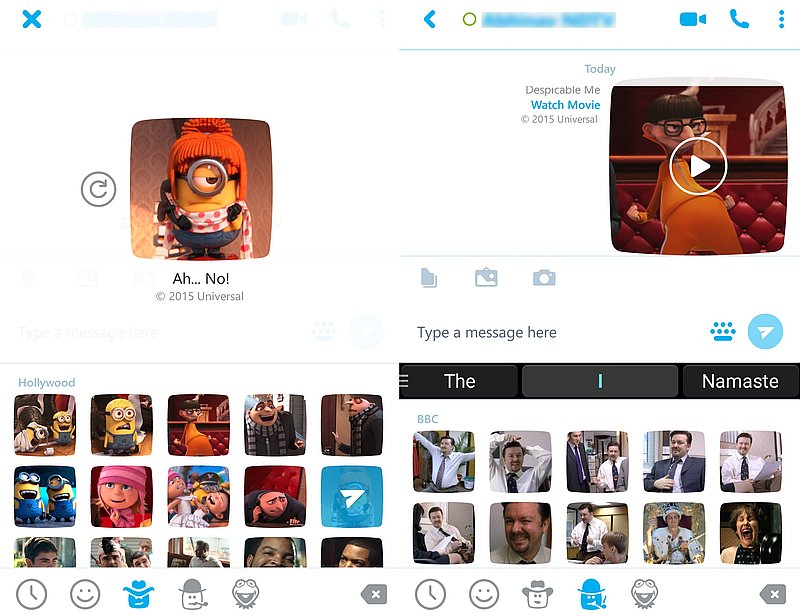 Microsoft's Skype has started rolling out an update for its applications on Windows, Mac, Android, and iOS, introducing a new feature called Mojis. The update also brings some changes that let users send media files faster. While the updated Android app is already available, the update will roll out to other platforms gradually.

Mojis is a new feature by Skype that would now allow users to send gifs from popular movies and TV serials in an IM chat. The messaging company has collaborated with movie studios and publishers including Universal Studios, Disney Muppets, BBC, and others for its Moji collection. Users can send Mojis by tapping on the emoticon button inside the chat window, selecting the one they like, preview it, and dropping them inside the chat.

Each Moji links to the source where it came from. For instance, when a Despicable Me Moji is sent in a chat to a friend, it shows the link of the episode or movie it was taken from alongside the copyright information for the show. Tapping on the link takes users to Microsoft Store from where they can purchase and download the movie or the show. Skype says that the first Moji release would include gifs from popular movies and shows such as Despicable Me, Bridesmaids, Pitch Perfect, Jurassic Park, The Muppets, and others.

Skype, besides introducing its Mojis feature in the v6.2 update for Android, has also brought other changes for users of the app. The update features a new media bar, making it easier for users to send media files, location and more inside a chat. Some Samsung, HTC, Sony and Xiaomi handsets might also be able to show unread messages count on the Skype launcher icon. The latest Skype app v6.2 can be downloaded from Google Play.