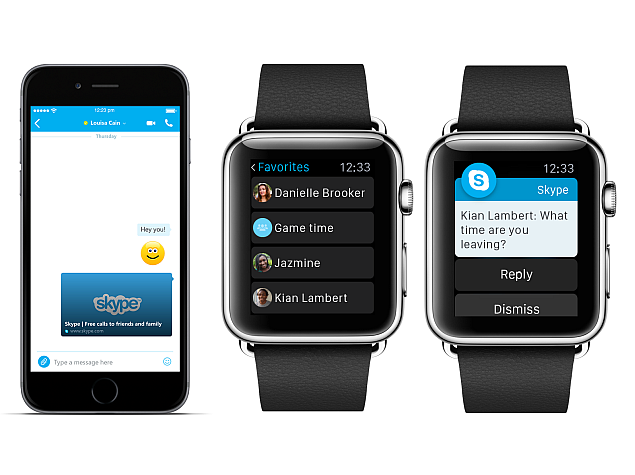 After updating its Android and iPhone apps in April, Microsoft on Tuesday rolled out another update of its Skype app for iPhone users. The update brings the app version to 5.13 from 5.12, alongside some improvements in the chatting section and Apple Watch integration.

As a part of the latest app update, Skype for iPhone would now start showing up Web link previews on chat that will bring "quick, rich ways to share information and content with the people who matter most." Previously, users would have to open the link to view the content inside it. This feature is available for iPhone models running iOS 7 and later.

Skype has also brought some updates for its Apple Watch features. The update will now let users reply to chats via the Apple Watch. Users can utilise voice for text inputs, or, can use prepared responses and a range of emoticons.

In addition, Apple Watch users can put Skype contacts in their 'Favourite' list and start chatting them directly from the Apple Watch. To add people in the favourites list, users would have to go to the iPhone app, swipe to the favourites view and tap on 'add favourites' option.

The update would also notify users of incoming Skype calls on the Apple Watch, from where users can choose to answer it or decline the call. In case the user decides to answer the call, the Apple Watch app will 'handoff' to the iPhone for chatting. All the new Skype Apple Watch features require an iPhone running iOS 8.2 or later.

In April, Microsoft brought a slew of features in the Skype's Android and iPhone apps. The company also announced an update for its Skype Qik video app with new video effects for the Android, iOS, and Windows Phone platforms.