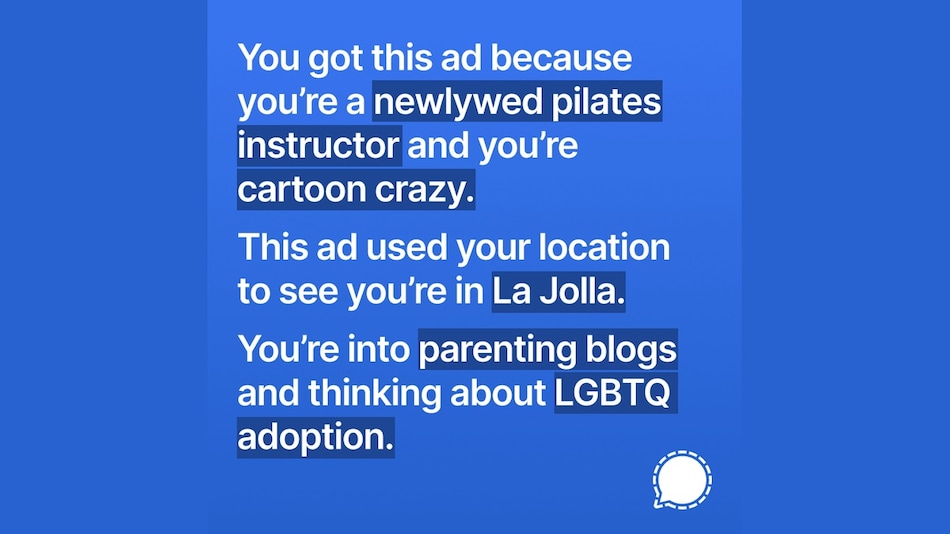 Signal displayed a bunch of ads on Instagram that it says were later taken down by Facebook. The ads mentioned the demographic they were targeting directly, with the aim to show users the personal data collected and sold by the social media giant. The move got Signal's account shut down from Facebook's ad platform, the privacy-focussed messaging app said. The social media giant gathers user search and interaction data from its Facebook and Instagram platforms and then further sells that information to allow users to be targeted directly.

According to the blog post, “Facebook is more than willing to sell visibility into people's lives, unless it's to tell people about how their data is being used.” Signal created some ads that showcased how Facebook uses its users' data to target them for ads. It did so by making highly specific ads on Instagram that showed its users that it is targeting them specifically.

Whether the user loves K-pop music, or whether the user is married or single, the ads showed the users the demographic the Signal was targeting. The ads also showed the location of the users, their interests and hobbies, their professions, and also their latest purchases.

On having its account shut on Facebook's ad platform, Signal said “We created a multi-variant targeted ad designed to show you the personal data that Facebook collects about you and sells access to. The ad would simply display some of the information collected about the viewer which the advertising platform uses. Facebook was not into that idea.”

"Facebook is more than willing to sell visibility into people's lives, unless it's to tell people about how their data is being used. Being transparent about how ads use people's data is apparently enough to get banned; in Facebook's world, the only acceptable usage is to hide what you're doing from your audience," the post added.

Instagram Rolling Out Captions for Stories, Reels to Get It Soon: How to Use