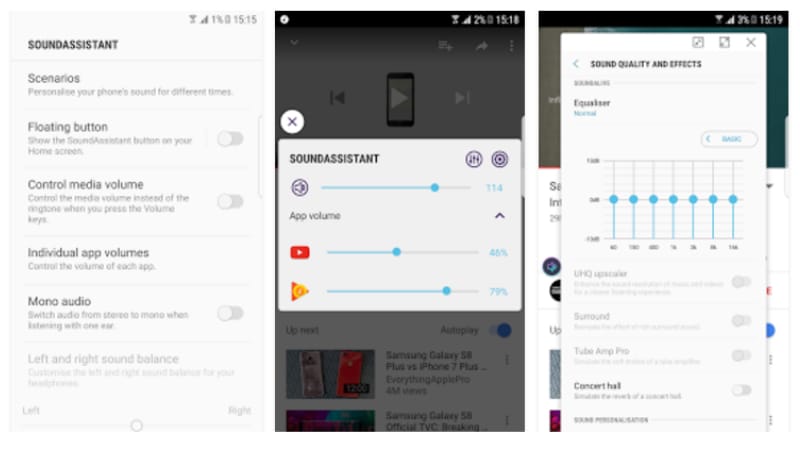 Samsung has launched a new app in a bid to give Galaxy phone users more control of the sound on their smartphones. The Android app is called SoundAssistant and it allows users to personalise their sound settings as they prefer, and give them more control of sound in individual apps.

The SoundAssistant Android app is fully compatible with Galaxy S8 and Galaxy S8+ units, so other Galaxy phone users may find few features missing. For example, if you do own a fully compatible device, you’ll be able to specify output path for each app by heading to the specified music app -> Bluetooth or Game app -> Speaker.

The SoundAssistant app lets you control various functions of audio, and automatically switches the volume keys from controlling call volume to media volume for controlling the app that is currently running on the smartphone. The customisation of audio on the app is also deep with 150 steps of fine volume, support for Floating Equalizer(EQ), ability to create and activate personalise sound settings, and it even brings support for mono audio and left/right balance as well.

There’s also an option called Dual app that allows your Galaxy device to play music on two apps simultaneously. So essentially, you can play Spotify on your Bluetooth speaker, and listen to a YouTube video on your smartphone simultaneously, without overlapping the two, and controls for both are also given separately.

This app currently works with all Galaxy devices running on Android 7.0 Nougat only. , and while it is a useful app, this restriction limits its availability only to a few devices. Let’s hope Samsung expands its compatibility to non-Galaxy and old Android software users in the future. For now, compatible users can download the app for free from Google Play.