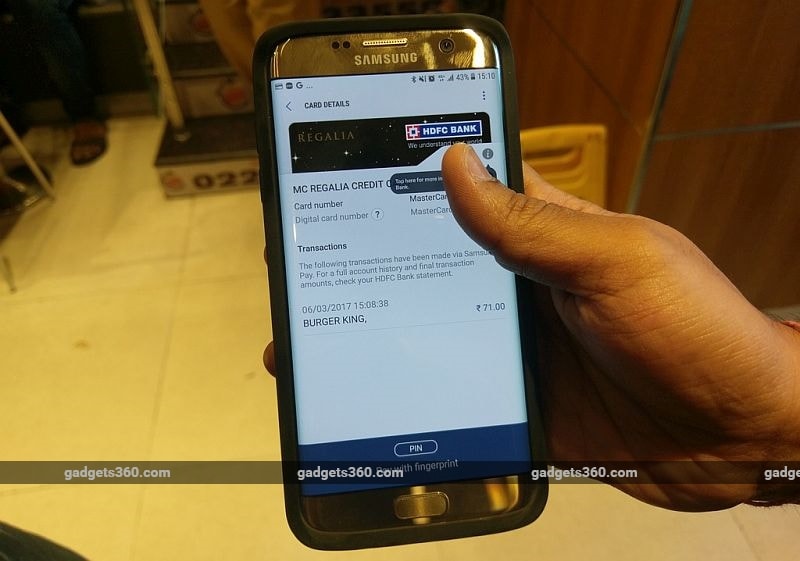 We tested out the new Samsung Pay feature, and it worked. Samsung has confirmed that in its Early Access state, the mobile payment solution is available with select banks including Axis Bank, HDFC Bank, ICICI Bank, SBI, and Standard Chartered. Credit and debit cards of all these banks are supported right now, with the exception of SBI, for which only credit cards are supported. Samsung adds that Samsung Pay will be soon supported by American Express and Citi Bank. Additionally, Samsung Pay payment solution also lets users pay via Paytm wallet.

So, how does one get started? First, users will need to register via this page. Then, they'll need to ensure the Samsung Pay app is installed. If users do not see the app in their app drawer, they will need to ensure their device is on the latest software version, then add then Samsung Account ID via Settings > Accounts > Add Samsung Account. They should then see the Samsung Pay app icon, which will enable them to download and install the app.

Samsung Pay app registration is a one-time process, and it can be done with your Samsung Account ID and password. You can register fingerprint by tapping Use Fingerprint and users can also set up Samsung Pay PIN for payment authentication. During setup, users can opt for Skip and Use Samsung Pay PIN on the verification method page. For adding new cards, tap on Add your Debit/Credit Card which by default launches the camera within the app to auto read card details. It can be also done manually.

For making a payment using Samsung Pay at a store, owners of compatible Samsung Galaxy smartphones will need to launch the Samsung Pay app and then select the card they want to pay with by swiping left or right. Users can then authenticate the payment by verifying their fingerprint (or using their Samsung Pay PIN), and then place the phone near the POS machine or card reader or NFC reader to complete the transaction. In case prompted for a PIN, users may be required to input 4-digit card PIN.