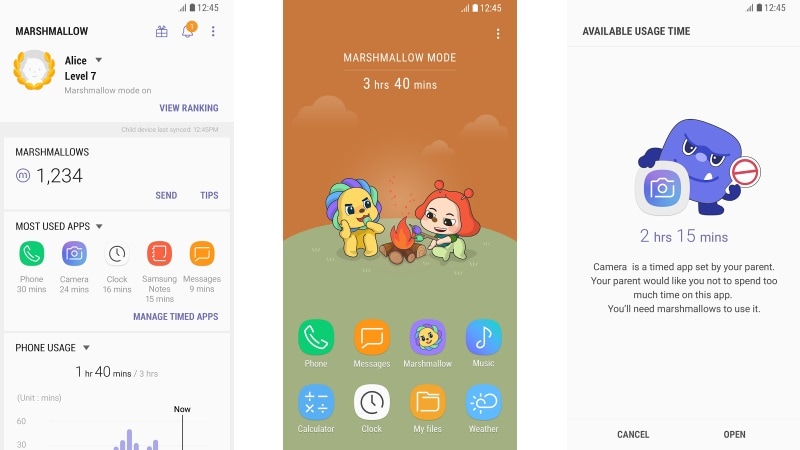 Interestingly, unlike some other parental control apps, Samsung Marshmallow puts the kids in driving seat and allows them to decide a daily limit for their own smartphone usage instead of letting their parents decide it for them. Before you jump to any conclusions, the app also allows parents with an option to prevent their kids from using certain apps on their devices. Parents additionally get the option to choose a bedtime for their kids in order to make sure they get good night's sleep.

The app features a Marshmallow mode, which allows the children to use only eight apps and helps users in decreasing their child's smartphone usage. Both parents and their children can get daily as well as weekly usage reports for detailed information and "a child can earn Marshmallow points when he uses his smartphone properly and loses the points when he does not," Samsung says the app description on Google Play.

With enough Marshmallow points, the children can purchase gifts of their choice with real gift cards that can be used at outlets including Best Buy, Amazon, or Dunkin Donuts, as pointed out in a report by Android Police.

"Using Samsung Marshmallow, a child learns how to use a smartphone naturally by making his or her own smartphone usage plan, achieving goals, and getting rewarded. Also, parents can use the Marshmallow app to talk about smartphone usage habits with their children," the company says.

The Samsung Marshmallow app is meant exclusively for company's Galaxy smartphones and is compatible with devices running Android 5.0 Lollipop or later. The app is already available and can be downloaded from Google Play store.