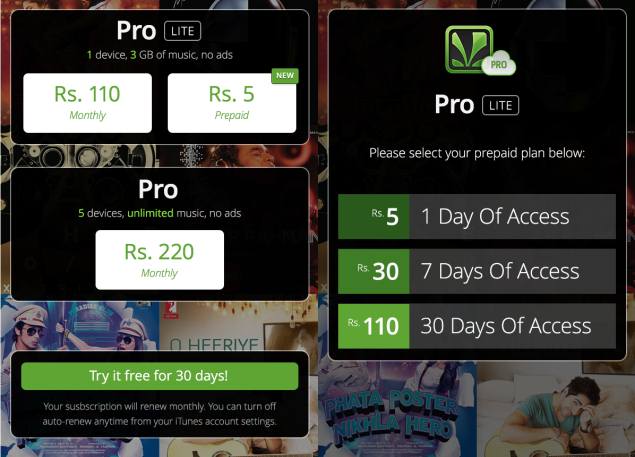 Carrier billing is now available to mobile subscribers for the paid music subscription service, Saavn Pro. The company has tie-up with its participating carrier partners, including bigger carriers like Airtel and Vodafone, for the service billing.

Android device users on these networks can now pay for the access to Saavn Pro service with their prepaid carrier balances or postpaid accounts. Prepaid (non-subscription) users of Saavn Pro will also have the access to same features as already subscribed users of the Pro service. The offline content is maintained on the prepaid listener's device and it gets reactivated with payment.

Airtel or Vodafone subscriptions can purchase Saavn Pro in increments of 1 day, 1 week, or 1 month without a subscription, and without a credit or debit card. The service is available for Rs. 5 for a single day's access, Rs. 30 for a week, or Rs. 110 for a month, for all users who have updated to the latest version of Saavn for Android (version 2.7).

Saavn Pro is the company's offline music listening product which makes listening to online music ad-free. All of the music genres available on Saavn, such as film, bhangra, devotional, ghazals, pop, and more, are available for offline listening, as are tracks in multiple languages, including Hindi, Punjabi, Tamil, Telugu, and English.

The company had launched its Saavn Pro service back in July 2013. The service initially offered a 30-day free trial, after which users could subscribe to Saavn Pro for Rs. 220 per month directly through their Google account. The company also offered a Lite version for Indian consumers at Rs. 110 per month.
Comments