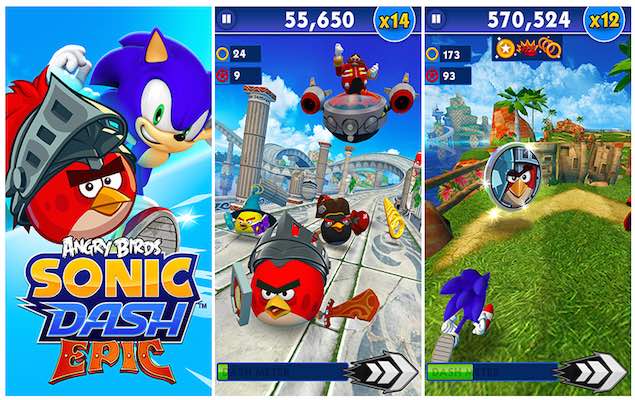 Rovio Entertainment, creator of the Angry Birds series, has partnered with iconic video game maker, Sega. Characters from Angry Birds Epic will find their way to Sonic Dash, an endless runner from Sega featuring its timeless mascot, Sonic the Hedgehog.

For three weeks from today on the App Store, Google Play, Amazon Appstore, and Windows Phone Store, this in-game event will include three of the most popular and best-known characters from the Angry Birds franchise: Red, Chuck, and Bomb.

"We were thrilled with the opportunity to work with Rovio on this integration," said Chris Southall, CTO of Hardlight in a prepared statement. "The expressive, colorful, and fun characters from Angry Birds Epic lend themselves flawlessly to Sonic Dash and really enhance the overall experience."

Featuring a different fan-favourite Angry Bird from Angry Birds Epic each week, including Red 'Knight,' Chuck 'Mage,' and Bomb 'Pirate.' Players will dash through the endless runner, collecting the special Angry Birds Epic tokens to unlock featured characters. Once a character is successfully unlocked, it will remain playable following the close of the event. Players will also have the option to purchase Red, Chuck, and Bomb using premium currency during the event.

"Our Epic Sonic collaboration together with Sega is a fantastic milestone for Angry Birds," said Wilhelm That, Head of External Products at Rovio. "Having two such iconic game characters and games work seamlessly together will delight millions of fans worldwide in both Sonic Dash and Angry Birds Epic."

Sonic Dash is also celebrating a major milestone -- the game has achieved over 100 million downloads since its launch in March of 2013.

Rovio is also in the news for finally launching Angry Birds Fight! for the rest of the world. It has you matching birds to battle enemies quite similar to Puzzle & Dragons, it marks yet another attempt from the Finnish company to have a game that matches the scale of success other free-to-play mobile titles have in recent times.

Though it has recently expanded Angry Birds into non-gaming segments such as clothing and toys, it's struggled to keep up with seemingly nimbler competition in its core space - mobile games. With Angry Birds Fight! it appears that the company is far from giving up. The game is now available Android and iOS.