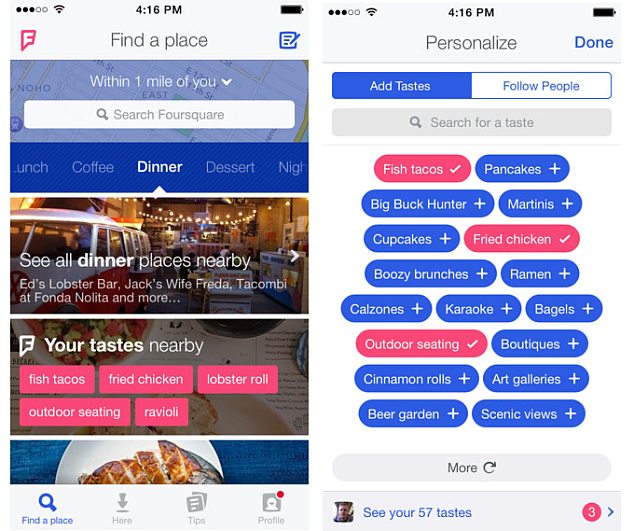 Foursquare on Wednesday completed the division of its services into two apps, with the release of the updated Foursquare app for Android and iOS. The new app concentrates on personalised place suggestions, while the Swarm app, which was launched in May, concentrates on the social aspects of location discovery with check-ins, messaging, and contact-based proximity alerts.

The updated Foursquare app hits version 4.0 on Android, and version 8.0 on iOS. The update appears to have been rolled-out globally to Android and iOS users via Google Play and the App Store.

Along with an overhauled interface for both Android and iOS platforms, the Foursquare app update has brought personalised place suggestions based on the user's tastes, past ratings, and tips from friends and experts. The updated Foursquare app's store listings explain that tastes can be very specific or even generic, such as 'whiskey' and 'outdoor seating'. User chosen tastes will be highlighted as pink tags below place listings, along with other users' tags for the location.

The updated Foursquare app listing details that the new app lets users leave tips to share their discoveries and earn expertise points, and can also see tips of a place when they enter it. Users will via the new app also be able to follow "people and influencers whose tastes" they trust, and these people's tips will show first in the feed. Users can also connect their Facebook and Twitter accounts to the Foursquare app to see which spots friends have liked nearby.

The app also has a new 'Here' button, which offers suggestions to Foursquare users according to their current location. Users can look for place suggestions nearby, or even 'plan ahead' to look for places in locations they are about to visit.

"The new Foursquare frees you from having to read long, random reviews, wondering if those people share your tastes. With Foursquare, find things based on your tastes, the places you like, and the friends and experts you trust most," said company on its announcement blog.

Notably, the updated Foursquare app constantly tracks user location, even when the app is closed. Users will have to opt-out of this feature, which is automatically enabled when users update their Foursquare app to the current version, or install it. The constant tracking feature was reported by the Wall Street Journal, which points out the only warning the app gives of this functionality to the user is during installation, with the line, "Foursquare uses your phone's background location to help you find great places, and the best tips for when you're there. You can change this at any time in your settings."

The company also recently updated its privacy policy to reflect the change. Speaking to the Wall Street Journal, Foursquare CEO Dennis Crowley said that by tracking users, Foursquare would have "more valuable data" or user "trends" that it can then sell to partners and advertisers, of course, in anonymised form. The privacy implications are still huge, and while users can turn off the feature from the app's settings, it may still scare away current and potential users of the Foursquare app.

Foursquare on its announcement blog post said since the launch of its services five years ago, the community has "contributed 6 billion check-ins, 55 million tips, 65 million places, hundreds of millions of photos, and billions of social connections."

Notably, the trend of place suggestions is one that is picking up steam, as users are now connected to data streams on the move and are hungry for information. Personalised suggestions, including tips from friends and social networking contacts, are a great way to quickly and conveniently get curated information on the best places to visit. There are several firms trying to offer users relevant information in this space, and Foursquare remains one of the biggest.

Other rivals include Yelp, and most recently in big way, Google, which recently revamped its Explore feature on Google Maps and made it easier to access on Android and iOS apps. The Google Maps Explore feature can be used to look for nearby locations, as well as for planning ahead, just like Foursquare.

Google has been working on numerous location-based features, and its Search app was recently updated with an improved Search Nearby feature, which remembers items that a user has searched for in the past, and then using location data, informs the user via a Google Now card when a nearby retail store is stocking the same item. For now, real-time inventory data is not visible.
Comments