The makers of Remove China Apps said that it wasn’t aimed to “promote or force people to uninstall any of the application(s)”. 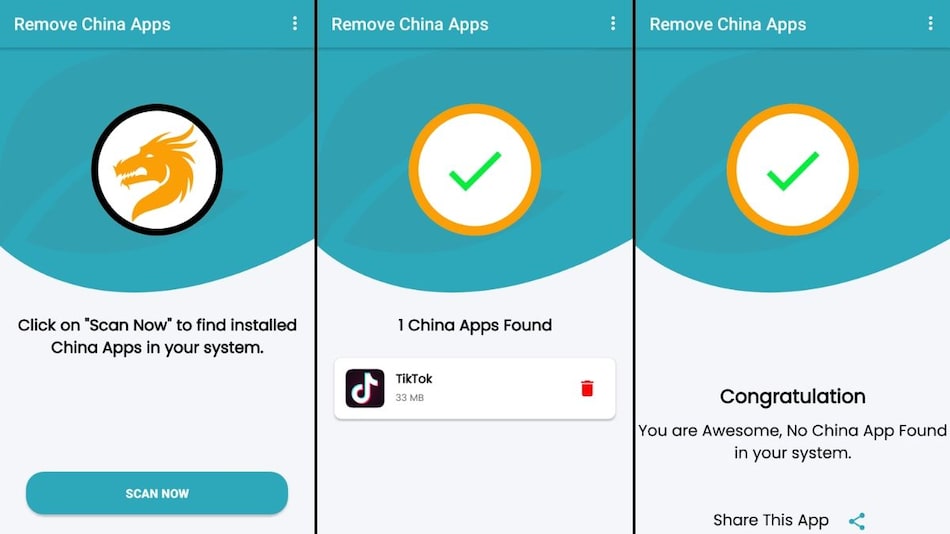 Remove China Apps has been pulled from Google Play. According to Google's Deceptive Behaviour rules, an app cannot encourage users to remove third party apps, and do it was suspended, as the app was designed to help users uninstall Chinese apps from their Android smartphones. It was published on Google Play on May 17, and came into the limelight last week. The Remove China Apps even emerged as the top trending app on Google Play and crossed over 50 lakh downloads.

The app notably came to its existence at a time when anti-China sentiment is at peak in the country, for reasons including the coronavirus outbreak and India-China border dispute.

This is the second high profile app to be removed from the Google Play store this week. Just a few hours before Remove China Apps was removed, the Mitron app was also removed from the store. The app was removed for violating the store policies, after surging past 50 lakh downloads fuelled by anti-China sentiments.

The Indian Express first reported about the removal of the Remove China Apps app, but since then more details about the reasons for the removal have come to light. The makers of the Remove China Apps, OneTouch AppLabs, confirmed its suspension from Google Play through a tweet posted on late Tuesday. The Jaipur-based company claims on its website that while a large number of people were using the app to remove apps made by Chinese developers, it wasn't aimed to “promote or force people to uninstall any of the application(s)” and developed “for educational purposes only.”

However, Google declined to provide further comment on the suspension.

Received public praise
The Remove China Apps received a large amount of positive reviews on Google Play, with an average rating of 4.9 stars. Its downloads also reached new levels shortly after getting popular on social media. The quick growth of the app suggested how a large number of smartphone users in India are looking for a solution to stay away from Chinese offerings. It's clearly coincided with the ongoing measures by the government to cut off its ties with Beijing due to cross-border tensions.

Apps including TikTok have already faced a public outrage for being a Chinese platform. In contrast, the rise of the anti-China sentiment helped TikTok alternative Mitron that was initially believed to be an Indian app, though a recent report highlighted its link with Pakistan. The latter was, however, also recently pulled from Google Play for violating spam and repetitive content policies.