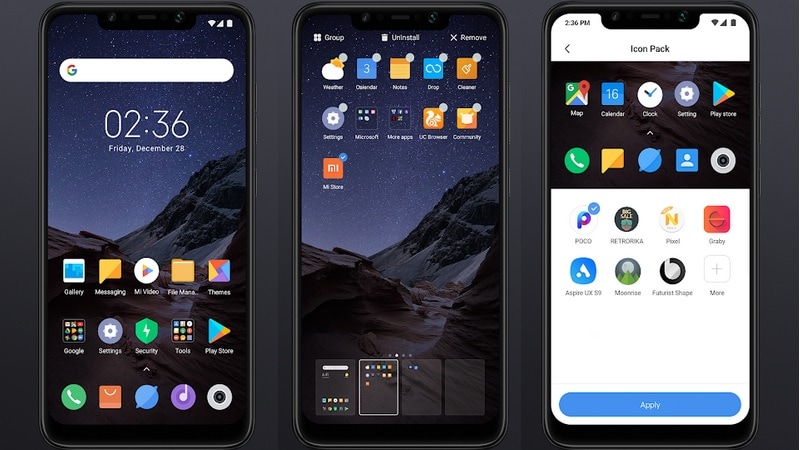 The custom Poco Launcher has been released in beta on Google Play by Xiaomi.

Xiaomi sub-brand Poco earlier this month launched its first smartphone, the Poco F1 in India and other markets. Instead of running an untouched version of MIUI, the Poco F1 runs MIUI for Poco, a customised variant of the software on top of Android 8.1 Oreo. The custom Poco Launcher has now been released on Google Play, albeit in beta, by Xiaomi. Key features of this launcher include a clean home screen, an app drawer, privacy features, and icon customisation. File size of the Poco launcher on Play Store is expected to vary from device to device. It works on Android smartphones not running MIUI.

The Play Store release was promised at the Poco F1 launch to happen on August 29, the day of the smartphone's first flash sale. The Poco Launcher on Google Play is however listed as an unreleased app and the early access is full. Interested users can sideload the APK directly from APKMirror, as spotted by Fonearena. Version listed is 2.6.0.3 and file size is around 15.5MB. Apart from the Poco Launcher, MIUI for Poco comes with certain stock Android features including Quick Settings tiles and different icons.

As per the listing on Google Play, the Poco Launcher is a "full-featured customisable launcher for Android phones". It comes with a clean and minimal home screen, an extensive search feature with app recommendations and icon colour categories, the ability to group apps based on category, to allow usage of third party icon packs for customisation, the ability to keep apps private, and faster animations. All in all, it appears to be a stripped-down version of MIUI that borrows elements from Google's stock version of Android Oreo.

Ahead of the Google Play listing, the Poco Launcher APK beta v0.1.5 was shared online in a MIUI forum post, and was accessible for MIUI-based smartphones.

To recall, the Poco F1 was launched in India at a starting price of Rs. 20,999 for the variant with 6GB of RAM and 64GB onboard storage. The smartphone comes in Rosso Red, Graphite Black, and Steel Blue colour options, and packs in specifications including a Qualcomm Snapdragon 845 SoC, dual rear camera setup, and a display notch.

Poco earlier this week announced the release of the Poco F1's kernel source code in an attempt to encourage the development of custom ROMs for the smartphone.