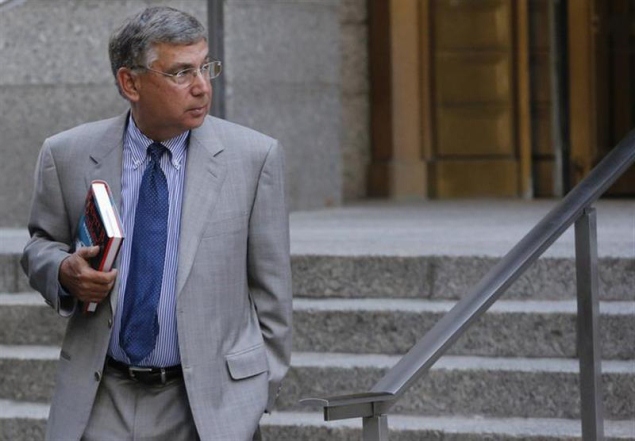 The chief executive of US publisher Penguin testified Tuesday that a provision in its e-books contract with Apple played a role in a decision to change its contracts with other retailers, such as Amazon.com.

The testimony of David Shanks appeared to bolster the US government's case that Apple conspired with five publishers, including Penguin, to fix prices in the developing e-books market in 2009 and 2010.

Shanks, the CEO of Penguin Group (USA), said a clause in Apple's contract allowing it to match the lowest prices for e-books sold by rivals was "certainly a factor" in seeking to move other retailers including Amazon to an agency model, in which publishers control prices.

In a deposition that was played in court, Shanks appeared to go even further on the so-called most favored nation clause, one of the targets of the government lawsuit against Apple.

"The fact that the parity clause was in the contract more or less made it a given we'd have to be at agency," Shanks said in the deposition.

Shanks was the first executive from the publishing houses at the center of the alleged scheme to testify in the non-jury trial before US District Judge Denise Cote in federal court in New York.

The Justice Department sued Apple and the five publishers in 2012, accusing them of working together illegally to increase e-book prices and undo Amazon's market control.

At trial, the government has sought to show Apple's most-favored nation clause provided an incentive for the publishers to get other retailers onto the agency model and raise prices there too.

Last to settle
In the lawsuit, Penguin, a unit of Pearson, was accused of conspiring to raise the prices with four other publishers, News Corp's HarperCollins Publishers, CBS's Simon & Schuster, Hachette Book Group and Macmillan.

Penguin settled with the Justice Department in December 2012, but nevertheless was on the verge of being the only publisher left to face trial alongside Apple on parallel claims by state attorneys general being tried as well.

Penguin became the last to settle those claims on May 22 by agreeing to pay $75 million, the largest settlement so far in the case.

In several hours of testimony, Shanks said he was concerned by the low prices being offered by Amazon, which he said was one of Penguin's biggest customers for books in 2009 and which also accounted for about 90 percent of its e-book sales.

Shanks said Amazon's strategy of pricing new releases and best sellers at $9.99 threatened to disrupt a "delicate ecosystem" in which people who wanted to pay less for books waited until after the hardcover release.

"What transpired was by having e-books now at $9.99, it was cannibalizing hardcover editions, which sold on average at $26," Shanks said.

Apple approached Penguin and the other publishers in 2009 as it prepared to launch its iPad and ultimately put forward an agency model, for reasons that are in dispute in the trial.

Under later cross examination, Shanks said Penguin strongly resisted the most favored nation clause, saying it was worried it would lose money if Apple matched Amazon's low prices and then took a commission on top of that.

That testimony appeared to bolster Apple's contention that there was no conspiracy and that negotiations were hard fought throughout.

Shanks said Penguin agreed to sign on to those terms with Apple after other major publishers already had done so.

After Barnes & Nobel adopted that model, too, Shanks said Penguin moved to get Amazon on it as well. Although Penguin was the last of the five publishers to approach Amazon, negotiations were tough, he said.

"They yelled and screamed and threatened," Shanks said. "It was a very unpleasant meeting."

A representative for Amazon did not immediately respond to a request for comment.