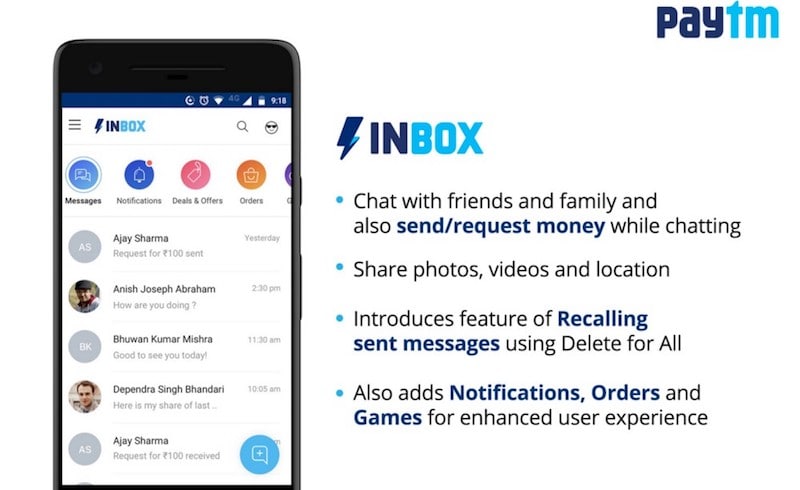 On Thursday Paytm officially rolled out a messaging feature, which had been reported about earlier in August. Called Paytm Inbox, the feature is a full messaging platform, which allows users to chat using messages, share photos and videos, and of course, you can send and receive money (using the Paytm Wallet). In a pretty clear dig at WhatsApp, the Paytm blog post about the new feature also mentions Message Recall as a highlight feature - a jab at how long it took to get WhatsApp Delete for Everyone. It also shares another new WhatsApp feature - live location sharing.

“We have realised that besides making payments, our users and merchants also like to communicate with each other," said Deepak Abbot, Senior Vice President, Paytm. "There is a need of social messaging, commerce and payments seamlessly blending into one another."

"One step for us towards meeting this consumer need is 'Paytm Inbox' where you can chat with friends/ merchants and send/ receive money effortlessly and securely," he added. "This will help us drive greater engagement on our platform and build a stronger bond with our customers."

The update - which is already available on Android, and coming to iOS soon - adds Inbox to the main Paytm app, in the bottom navigation bar. Tap on the Inbox and you can start chatting with your friends. It uses your Paytm linked phone number and if you press the new message button, it shows you the phone numbers of all your friends who use the app as well. Given how many people have used Paytm - whether it was to take advantage of an e-commerce deal, to set up payments for Uber, or even to buy something offline when there was no cash available - we saw almost all of our phone contacts, which is a big advantage Paytm Inbox has over most new messaging apps, in that you can assume most of your contacts already are on the platform.

The actual messaging experience in Paytm is pretty standard though one disappointing UI element is that the text box is just a single line. This means that if you type a slightly long text of more than five or six words, you can't see what you were saying at the beginning on the sentence. This also makes it harder to edit your message before sending it.

On the bottom row, you'll see other icons, for the camera, gallery, send and receive money, and a location icon. We tested this using a second Paytm account with Inbox and it works as expected. However, if you're chatting with someone who either has an older version of the app (or with an iOS user), they won't get your message, or your money requests. Because of this, it might be a few days or even weeks before you can use Paytm Inbox ubiquitously, as people catch up to the latest version.

According to Paytm, Inbox will make payments easier, "as everyone from individuals to local retail stores to home-based entrepreneurs can now interact and initiate payments on-the-go."

The company added in a statement that "the messaging platform is encrypted end-to-end, and users can initiate private conversations and create group chats. They can also send photos and videos instantly, share live location, capture and share moments with the built-in camera. There is also a feature allowing users to recall their messages using 'Delete for All'."

It's worth pointing out that some time ago, Paytm founder Vijay Shekhar Sharma spoke to Gadgets 360 and said that the [then] upcoming chat feature wasn't a WhatsApp competitor. The use case, he suggested at the time, was around just before and after sending money - so you could tell someone how much money to send, or confirm that the money was received. At the time, the idea seemed more like the vision for FreeCharge's Chat and Pay feature, which was introduced in March 2016.

So why the digs at WhatsApp? Well, the chat giant - WhatsApp is the most popular messaging platform in India, with at least 200 million active users in the country - has been making its own foray into the payments space. It's testing a business messaging service, and it's expected to add UPI integration this year, so you could for example exchange messages with a chatbot to book movie tickets, and complete the payment, all from within WhatsApp. It's similar to how WeChat, the popular chat platform in China, is also the leading payments platform in that company.

Of course, Paytm is also a huge platform in India, with a user base that grew exponentially after the demonetisation initiative in November 2016 - Paytm also says it now has over 200 million wallets. The two companies are getting more and more alike, but they're coming to the same place from different directions, so it's going to be interesting to see which one offers the more comprehensive experience to users once WhatsApp's payments features are live.