Paytm Claims the Lead on UPI Payments, but It's Too Soon to Call a Winner 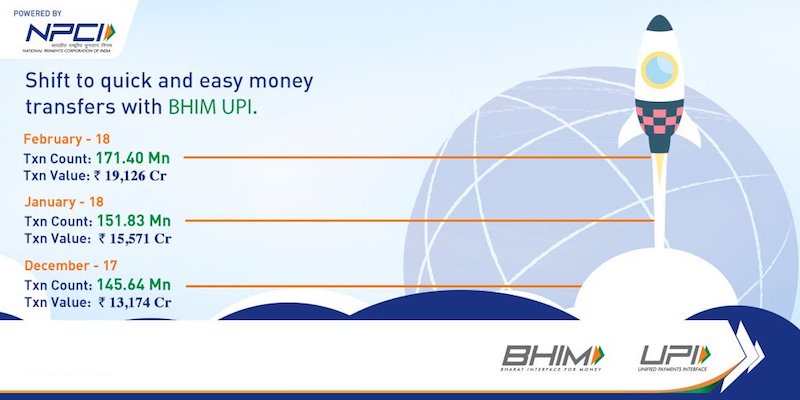 On Friday, Paytm announced that it has emerged as the largest UPI transaction platform, with 68 million UPI transactions facilitated via its apps in February 2018. Paytm added that it is enabling over 6 million merchants to accept payments via UPI, making it the market leader in mobile payments. NCPI revealed that total UPI transactions have reached 171.40 million, up from 151.83 million in January.

Ever since India's headlong rush into digital payments following demonetisation near the end of 2016, the rising star has been the UPI platform, later renamed BHIM UPI. Created by the National Payments Corporation of India, a quasi-regulatory body that is owned by a consortium of banks, initially the UPI platform was only open to banks, and not to the mobile wallets that had been dominating the digital payments space at the time.

Since then though, a lot has changed. Paytm has become a bank that's on UPI, and its biggest competitors in this space aren't banks themselves, but Flipkart-owned PhonePe, the Google Tez app, and most recently, WhatsApp, which has started its payments rollout as well.

While it's clear that the use of UPI has been growing tremendously - the RBI reports total transactions and value of transactions - what's been a lot less clear is how this growth is happening. Cashback offers and incentives meant that people could spend a rupee to earn Rs. 25 or more, and it's a strategy that many companies applied to boost their numbers. As each company entered the fray and offered more incentives, the users have ebbed and flowed, making it hard to track digital payments in India. PhonePe, Tez, and Paytm have all taken turns at being the biggest UPI company before seeing the title move on.

It seems to suit the different UPI companies though, who all say that a regulator is not needed. It was in fact the launch of WhatsApp's payments, which don't offer any cashbacks or incentives (yet), which caused controversy - with Paytm in particular alleging that the platform is and not interoperable, although it is actually possible to send and receive money to and from other UPI apps.

An additional problem is that none of the companies have to publicly report their usage, and this means that you get some very different sets of numbers.

"Since the launch on September 18, we have already processed more than 140 million transactions till December 5th," the company told Gadgets 360 in January. On Friday, it added: "In four months of it's launch, Tez has over 13.5 million monthly active users and till date we have processed 250 million transactions."

That means that it added 110 million transactions in under two months. And it's important to note that both Paytm and Google claim that the cashbacks they offer do not count towards their UPI transactions.

In this way, one could infer that Paytm, Google Tez, PhonePe, and BHIM have together accounted for (very roughly) 155 million transactions in February (not including cashbacks sent over UPI), out of a total 171.4 million. The competition for UPI use is clearly something that's only starting to heat up, and with so few companies holding all the users in a very volatile market, it becomes clearer why WhatsApp's entry has some people worried.

Disclosure: Paytm’s parent company One 97 is an investor in Gadgets 360.