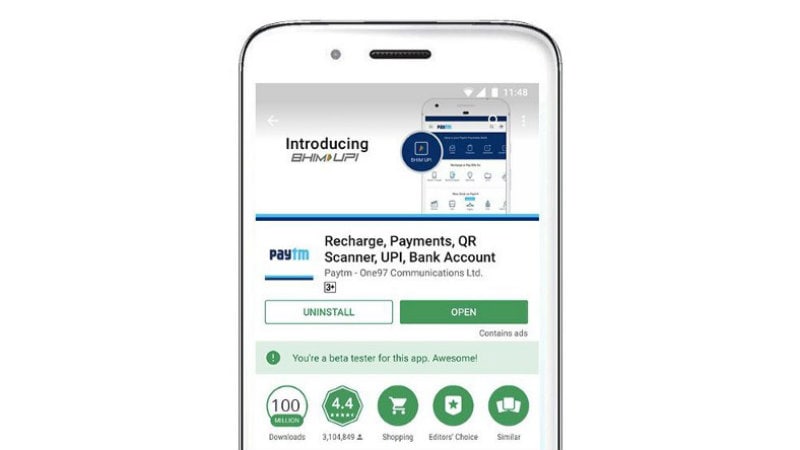 Paytm on Wednesday announced that its Android app has become "India's first payments app to cross 100 million downloads on Google Play". The app hit the milestone in the second week of December. The latest growth emerges weeks after the Paytm app has received BHIM UPI functionality via Paytm Payments Bank.

In a press statement, Paytm claims that it has become the most preferred payments app in the country, allowing users to scan its QR and pay at large merchants, grocery and kirana stores, milk-booths, local taxi/auto fares, petrol pumps, multiplexes, and restaurants among others. "We are overwhelmed with the 100 million downloads mark, reaching this milestone is a testimony to the efforts of the incredible team at Paytm. This achievement will offer us a strong boost as we work towards our goal of making India a digital-first economy," said Deepak Abbot, Senior Vice President - Paytm, in the statement.

Last month, Paytm started rolling out BHIM-UPI compatibility via its payments bank. The compatibility was debuted on Android but is yet to make its way onto iOS devices. It enabled users with a Paytm virtual payments address (VPA) to make and accept payments via the BHIM-UPI framework.

Founded in 2010 as a prepaid mobile recharge website, Paytm has since transformed and emerged as the Paytm wallet in 2013. The company, owned by One97 Communications, ventured into the Indian banking sector by launching Paytm Payments Bank in November. It also offers a full-fledged e-commerce platform through a Paytm Mall, which received a dedicated app in August this year.

HTC to Launch Limited Number of Smartphones in 2018: Report