Opera for Desktop Gets Free VPN on Windows, Linux, and Mac 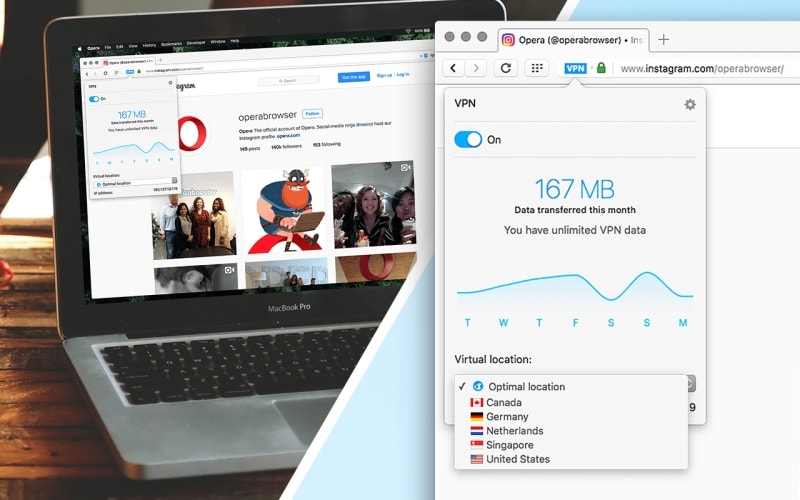 After bringing its free VPN services to iOS and Android, Opera has now released a free, no-login VPN for desktop users as well. The VPN is bundled in to the Opera browser and requires no sign-in or any setup - using it is as simple as the press of a single button. What this does is make using a VPN simple even for users who are not technologically-inclined. Opera's browser VPN was first launched as a beta in April this year.

A month later, Opera VPN was available as a standalone app on iOS. The VPN was then launched for Android in August before finally rolling out the final version for desktop users now.

The VPN functions the same way on all three platforms. It's free and unlimited, and allows you to change your geographic location while also protecting your data from third party snooping. Opera VPN lets you choose from one of five locations - Canada, Germany, The Netherlands, Singapore, and USA. This allows you to pose as someone who's visiting any given website from one of these five nations. This, in turn, will allow you to access region-locked content. The app supports English, Arabic, French, German, Indonesian, Japanese, Portuguese, Russian, and Spanish languages.

To activate it, Mac users just need to click the Opera menu, select "Preferences" and toggle the feature VPN on, while Windows and Linux users need to go to the "Privacy and Security" section in "Settings" and enable VPN there.

"If people knew how the internet truly works, I believe they all would use a VPN," says Krystian Kolondra, SVP of Opera browser for computers. "By making our browser VPN free and easy to use, we hope to make it an essential tool, just as the lock and key is to your house."

People can also let the Opera browser intelligently select the optimal server location based on factors such as network speed, latency, location and server capacity. When in automatic location mode, browsing through the VPN is always at maximum available speed.

"We know that people are concerned about their privacy online and that the interest for VPN is increasing," Kolondra adds. "However, two major obstacles are blocking people from using it: VPNs are too complicated to use, and they require a monthly subscription. Opera resolves both issues by introducing its free and easy-to-use service right into the browser."