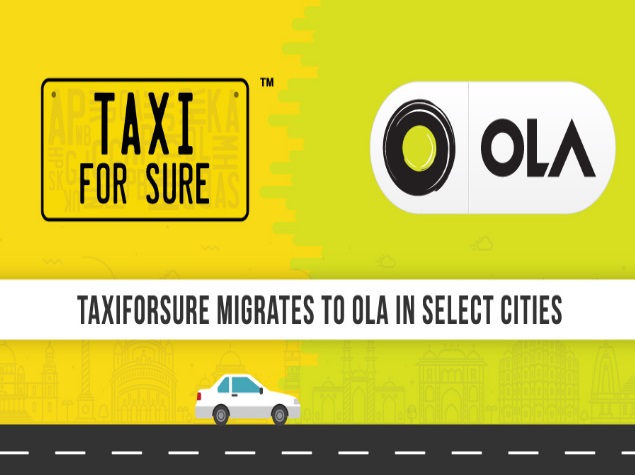 Mobile app-based taxi aggregator Ola (formerly Ola Cabs) has ceased operations for TaxiForSure brand in 22 Indian cities and is migrating accounts to Ola, according to a blog posted on TaxiForSure's website Monday.

TaxiForSure was acquired in a cash and equity deal by Ola in March this year for $200 million (roughly Rs. 1,279 crores), and its co-founders Raghunandan G and Aprameya Radhakrishna quit the company the following month.

The 22 cities where it will cease to exist as a brand are: Ambala, Bhavnagar, Coimbatore, Dehradun, Hubli-Dharwad, Jabalpur, Jamnagar, Jamshedpur, Kochi, Lucknow, Madurai, Mangalore, Patna, Raipur, Ranchi, Sholapur, Tiruchirappalli, Trivandrum, Ujjain, Varanasi, Vijayawada, and Visakhapatnam. For now, it seems like TaxiForSure will continue to exist for now as a brand in Indian metros.

Ola had announced last week that it would go mobile app only across its 100 cities of operations, the app added Ola Money as a payment option. The company recently launched Ola Store, an on-demand grocery delivery service, and is reportedly in talks to raise Rs. 3,150 crore ($500 million). Ola currently aggregates a fleet of over 200,000 vehicles in over 100 cities in India.

Ola had integrated TaxiForSure's hatchbacks into its app in June,we reached out to ask if the brand will cease to exist in 22 cities now that its accounts are now being migrated to Ola. The company's response is below.

"TaxiForSure continues to operate as an independent brand in the top 30 cities with a strong focus on building the most economical brand in personal transportation. The consolidation of TaxiForSure into the Ola app in the next 22 cities (the city) is designed to ensure a seamless experience for consumers, straight from the Ola app. We have ensured a smooth transition for driver and operator partners from the TFS platform to Ola's in terms of technology and training to ensure that nothing changes for customers in these cities. Customers can continue to book a ride of their choice through the Ola app with one touch. TaxiForSure continues to offer the most economical fares in 30 cities across the country, starting Rs. 49."