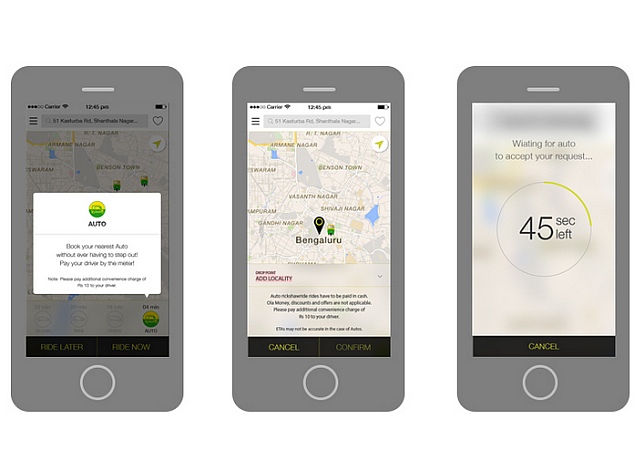 Ola (formerly Ola Cabs), after starting its pilot on-demand auto rickshaw services in Bengaluru, has also rolled out the service to Chennai, Pune and Delhi NCR. The Chennai and Pune services was launched almost simultaneously earlier in December, while the Delhi NCR service was announced on Tuesday.

Once again, the company is touting the service as "beta launch of autos" on the Ola app. As before, the service is available via the Ola app for Android and iOS, and users have to pay the auto rickshaw driver directly and cannot use Ola Money. Apart from the metre fare, users will have to pay a Rs. 10 convenience fee.

As of now, the number of autos in Ola's pilot service is limited, and each of the autos under the Ola service has been equipped with Huawei phones to track bookings, according to a report. Currently, the Ola auto service users will have to pay through cash. A report even suggests that the company is offering auto rickshaw drivers "quick training on etiquettes."

Ola Cabs is currently offering each auto rickshaw driver a minimum salary of Rs. 10,000 alongside Rs. 1,500 as mobile charges per month, claimed an earlier report.

The company, along with other app-based taxi services such as Uber, has been facing regulatory issues in the country, and had been prohibited to ply its taxi services on Delhi roads. With the Delhi Transport Department's modification of the Radio Taxi Scheme 2006 on Monday however, specific guidelines for the operations of all cab provider services, including app-based cab service providers, were detailed - pointing to an end in sight to the prohibition.

Back in October, SoftBank announced that it would invest $210 million (roughly Rs. 1,300 crores) in India's ANI Technologies, which operates Ola Cabs.