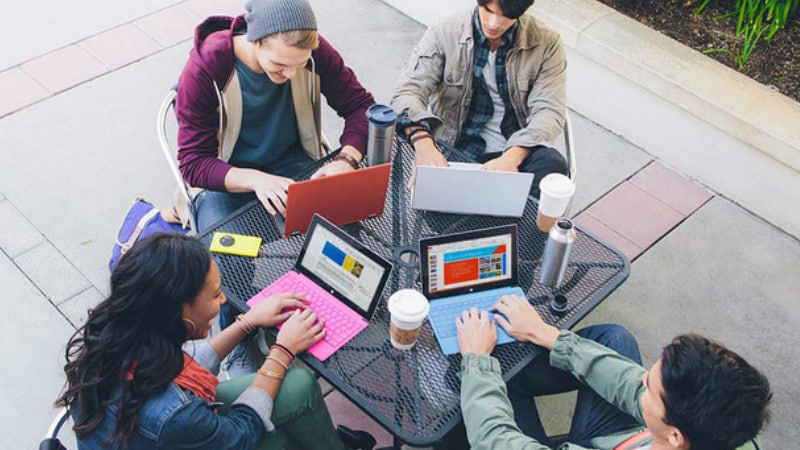 Microsoft's New York Spring Event headlines were the Surface Laptop and the new Windows 10 S education-focused operating system. However, at the event, Microsoft also announced that full-featured version of its desktop Office 365 applications was coming to the Windows Store, with a focus on education. Separately, more details about the default app settings of Windows 10 S were revealed.

Microsoft announced that the Office 365 for Education suite of apps is free for all students and teachers - and it includes Word, Excel, PowerPoint, OneNote, Teams, and other classroom tools. These apps are not available in the Windows Store right away, and preview versions for a few apps are coming in June. Microsoft Word, Excel, and PowerPoint will be available for testing to Office 365 Education subscribers starting next month. All the apps will be 32-bit only, and will be purchasable, downloadable through the Windows Store freely sometime in the fall of this year.

Other apps such as Access and Publisher will be made available gradually, while OneNote and Sway apps will stay in UWP form, and are available for download right away. This is because these apps already exist in fully-featured form. These new Windows Store apps are possible because of Microsoft's Project Centennial which enables the developer to convert desktop apps into a neat package for the Windows Store. Office 365 for Education will allow Web add-ins, but not COM add-ins on Windows 10 S.

The new Teams app will be made available sometime in the third quarter of 2017. Schools can install the preview on devices using the Set Up School PCs app or Microsoft Intune for Education. The preview will also be available for consumers through the Windows Store and can be activated on a Windows 10 S device with an Office 365 subscription.

While these apps will increase productivity among students in classrooms, Microsoft has also added some Window 10 S restrictions that may not be liked by all. For instance, the Windows FAQ page reveals that the default browser on Windows 10 S laptops will be Edge, even though other browsers will be downloadable from the Windows 10 Store. This means, any link you click in your email app, or other apps will open up on Edge by default - and this setting cannot be changed. Furthermore, the default search provider in Edge and Internet Explorer is Bing, and Microsoft is preventing users from using Google or other search engines as defaults. There is no clarity on whether these default options can be disabled or changed in Settings or not, but we hope there is. Microsoft did not impose such restrictions before, and it's surprising to see this change on the Windows 10 S platform.

"Microsoft Edge is the default web browser on Windows 10 S. You are able to download another browser that might be available from the Windows Store, but Microsoft Edge will remain the default if, for example, you open an .htm file. Additionally, the default search provider in Microsoft Edge and Internet Explorer cannot be changed," one FAQ answer reads.

HP and Acer have both introduced convertibles with Windows 10 S software for $299. The new Surface Laptop is priced at $999, and is available for pre-order right away.