Nokia X can run 75 percent Android apps 'without any modifications' 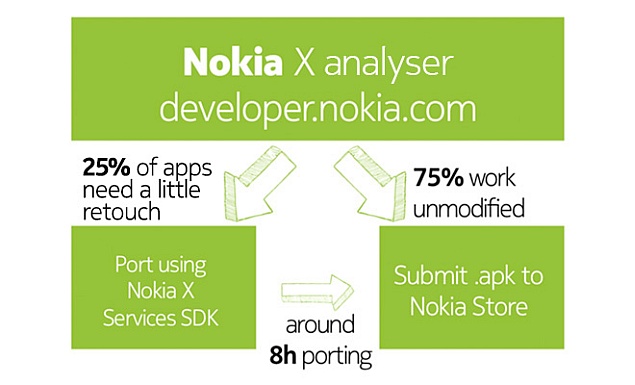 Right after introducing its Nokia X family at MWC 2014, the Finnish firm has quickly begun rolling out the Nokia X Services SDK to developers, as it had promised at the event.

As the Nokia X Services SDK rolls out, the official SDK page mentions that around 75 percent of Android applications will be able to run without any modifications. The firm has also launched an app compatibility analyser, which lets developers check whether any modifications are needed for their apps to be made compatible with the Nokia X Software Platform 1.0.

Nokia also details that the core Nokia X platform is built on AOSP v4.1.2, which supports API level 16. The company also says it has added several 'enhancements' on top of this, such as Nokia In-App Payment, Here Maps, Nokia Notifications, distribution in Nokia Store, payment with operator billing, and the Nokia X icon toolkit.

While developers will be interested to note the above details, end users will be happy to note that the Nokia X family of devices will be receiving a SwiftKey predictive keyboard for free. SwiftKey, the fast-typing predictive text keyboard, will also arrive with support for SwiftKey Cloud, which gives users the ability to backup and sync their personal writing style across multiple devices and offers predictions for current trending phrases and words.

Additionally, the popular BlackBerry Messenger or BBM service will also be reaching Windows Phone and Nokia X platforms. BBM for Nokia X will be available from the Nokia Store when the Nokia X platform launches.