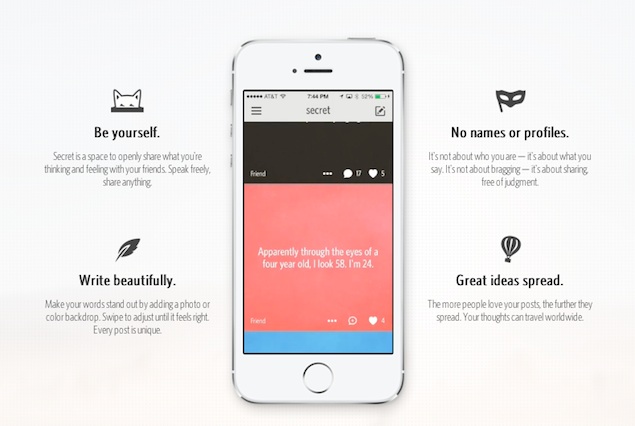 Remember the social networking, secret-sharing app, Whisper, which was originally based on the PostSecret model? Well, the iTunes App Store now has a new secret sharing app, called Secret.

The new app, which was released on Thursday on the iTunes store, is meant to help one share what one is thinking and feeling with friends anonymously. One can write anything that is on one's mind, free of judgement.

The app was created by former employees of Square and Google, David Byttow and Chrys Bader. The basic idea of the app is to allow users to anonymously share secrets with members within their social circles. There are no names, no profiles involved and people can as the official website says, be themselves. "Basically, every secret should stand on the merit of its own idea. It would be nice, for once, to have a normalising platform," said Byttow recently in an interview.

The idea of the normalising platform, is to encourage the free spread of an idea, rather than the person who has given birth to the idea, or as the app suggests, the secret. Also akin to Twitter, not exactly though, every secret has a comment thread attached to it, with individual users are assigned random avatars that stay consistent within a thread. A lot like a temporary handle similar to Twitter. A person however needs to have a minimum of three friends on Secret before one can see any posts. Usually text-based, the content also allows to add a photo or a colour backdrop to the post.

It does remain to ask, how anonymous is anonymous? Forgetting the wordplay, the recent news of the GCHQ and the NSA tapping mobile data via apps as such and even games, it is anyone's guess to be made as to how anonymous a post really is. Secret's own privacy page states that the app collects users' log, location and device information. It states that it is 'solely used by us for debugging and analytical purposes [e.g., to enhance the service]." In the event of a user deleting the account, the data will still be retained cached or archived copies will be created, as required by law or legitimate business services
Comments