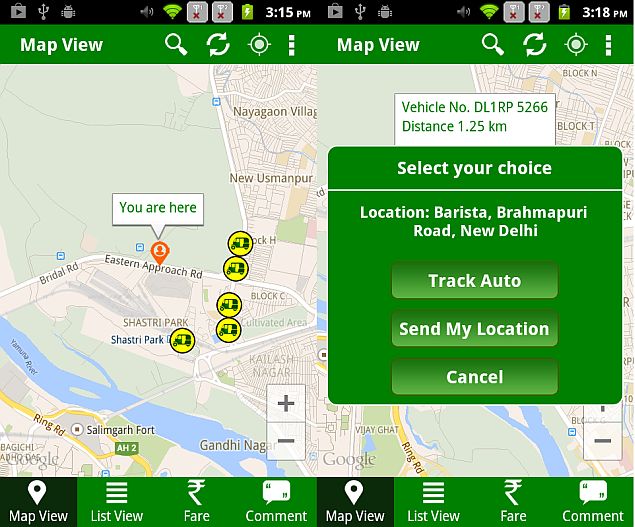 Now you can use your smartphone to hire an auto rickshaw in the national capital with a new app PoochO, which was on Friday launched by Lt. Governor Najeeb Jung.

The Delhi Integrated Multi-Model Transit System (DIMTS) has developed PoochO, which will now allow users to locate GPS-fitted auto rickshaws nearest to them, and then call its driver, whose numbers are registered with DIMTS, on their mobile phone to book a trip.

PoochO app can be downloaded on only Android phones from Google Play and thereafter, people have to ensure GPS of their phone is on and can find out the auto rickshaw nearest to them through Maps.

Launching PoochO, Jung said that this is very advanced technology, which would be very useful especially for women travelling in auto rickshaws at night.

"After booking auto through this app, commuters can share their travel details on Facebook and Twitter so that their friends and family members can get to know about their locations. Besides, there are several security elements in this app," Jung told reporters.

Jung also said that they can also give their feedback on their travels in the auto rickshaw via PoochO app.

"Pooch-O users can also calculate estimated fare for their trip and even track the auto [rickshaw] to check if it is coming towards them or not after calling its drivers. This app will soon be available on iPhone. Auto [rickshaw] drivers will also be benefited with this app as they will easily have passengers," S N Sahai, managing director (DIMTS) said.

Sahai said that there are 24,000 autos in Delhi which are fitted with GPS and hope that more autos will come under GPS so that a large number of people can be befitted with this app.

Additional CP (Traffic) Anil Shukla, who was also present, said that if a driver refused to take PoochO users, he would then be penalised with a heavy penalty.

"Traffic police will be asked to connect this app to its website, their traffic apps so that if auto driver refuses commuters without any reason, strict action would be taken against them," Jung said.