New app could use your cellphone to forecast storms 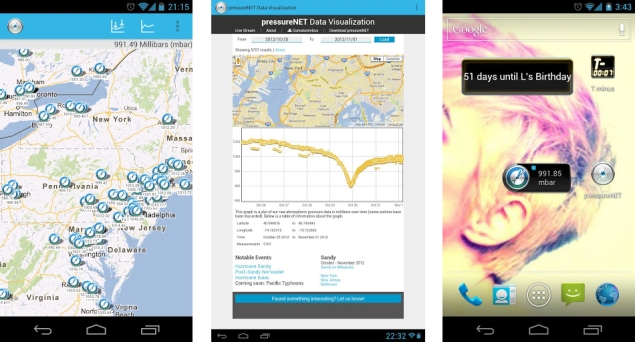 Researchers have developed a new app that lets users send pressure measurements to scientists which may help predict storms.

The app, called PressureNet, takes advantage of the latest sensor to show up in smart devices.

Some of the latest mobile devices now take atmospheric pressure measurements to determine elevation, in an effort to more precisely track location, the 'TechNewsDaily' reported.

At the same time, the pressure in an area can inform meteorologists about what's happening with the air masses in that location and help them forecast storms that will arrive over the next few hours.

Atmospheric scientists at the University of Washington in Seattle are trying to develop a way to use these device gathered measurements for short-term storm forecasts.

It will take some time for research before the scientists are able to test whether their method works. If it does, smartphone and tablet owners could help collect far more data than are now available from federally managed weather stations in the US.

"We could potentially have tens or hundreds of thousands of additional surface pressure observations, which could significantly improve short-term weather forecasts," Cliff Mass, who is leading the weather-predicting effort, said in a statement.

The UW team is now gathering about 4,000 data points an hour, the report said.

Previous versions of the app have been around since 2011, but its developers at the Canada-based Cumulonimbus just updated it in January so that users may share their data anonymously with Mass and colleagues.

"Thunderstorms are one of the areas of weakest skill for forecasting. I think thunderstorms in the middle part of the country could potentially be the biggest positive for this approach," he said.

Researchers hope to compare their smartphone- and tablet-aided forecasts to traditional predictions.