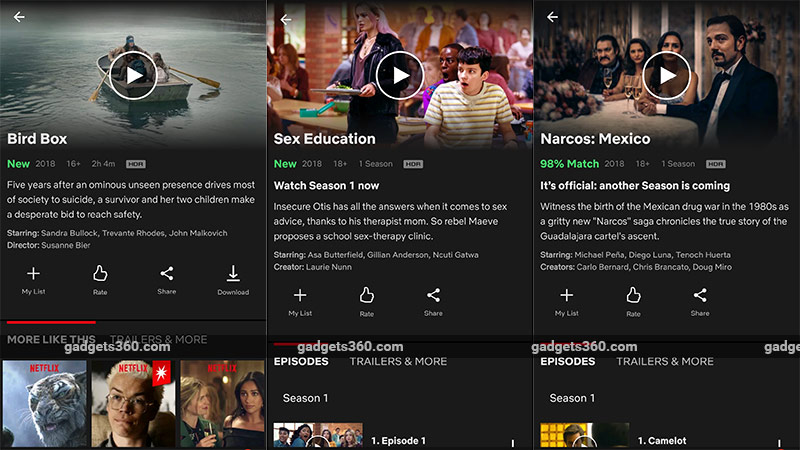 Netflix has enabled HDR support for the Google Pixel 3 and the Pixel 3 XL. These smartphones have HDR displays and are capable of HDR playback. However, Netflix did not offer HDR support for these devices until now. A few other popular devices that have HDR support of the Netflix app are Huawei Mate 20, LG V40, LG G7, Samsung Galaxy S9, and Samsung Galaxy Note 9. With this support, users can make the most of the HDR10 display their smartphone comes with.

A few Pixel 3 and Pixel 3 XL users are now seeing the HDR badge on Netflix shows shot in HDR. Earlier, the Netflix app did not show this badge for Pixel smartphones, and users had to settle for an HD version of the content, without HDR. Netflix has confirmed to Gadgets 360 that it now supports HDR on the Google Pixel 3 and Pixel 3 XL.

We'd like to remind readers that Netflix only shows Ultra HD 4K and/ or HDR content if a 'Premium' subscription has been purchased, which in costs Rs. 800 per month and also enables viewing on 4 screens at the same time. The Google Pixel 3 and Google Pixel 3 XL have 2K displays, and thus the Ultra HD 4K tag would never be visible in any case. The rollout of support was first reported by Android Police.

We checked a couple of Netflix shows like Bird Box, Narcos: Mexico and Sex Education on our Pixel 3 and could see the HDR badge against the show name. Netflix has also added the Pixel 3 and the Pixel 3 XL to its official list of devices with HDR support.

Notably, a few Pixel 3 users aren't able to see the HDR badge for these shows hinting that this could be a staged rollout of the HDR support feature for the Google devices. HDR support improves the content viewing experience by providing a higher level of contrast between the light and the dark images on the screen.