sers can send and receive apps with nearby Android handsets without the need for an Internet connection. 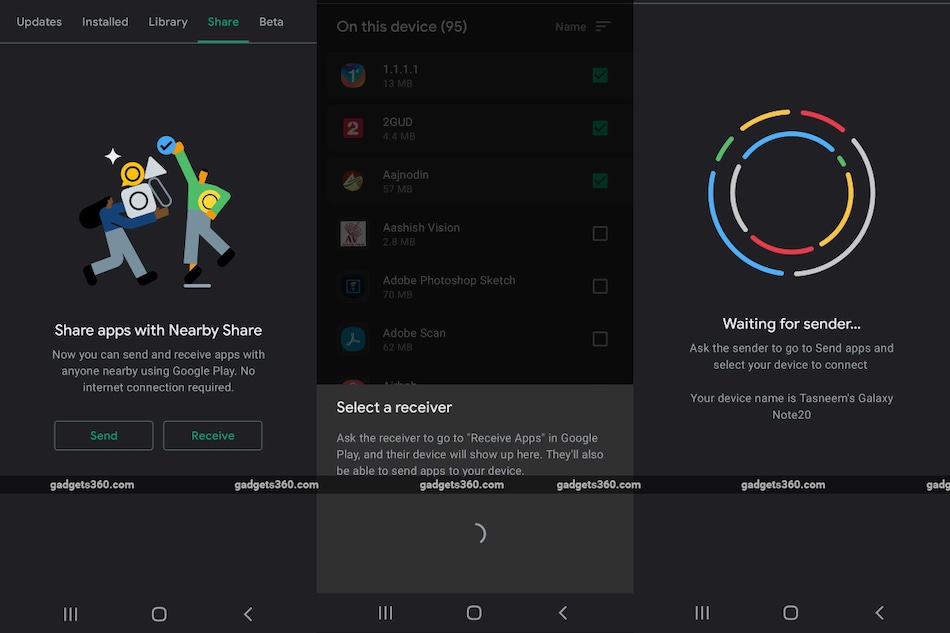 Google is now rolling out the ability to share apps with nearby Android handsets using Nearby Share. This feature was announced for select Android phones in August and is essentially Google's version of Apple's popular AirDrop feature. Earlier, it only allowed users to send and receive files, photos, and videos. It is now rolling out the ability to send and receive apps as well. This new added ability was announced back in December, and its rollout was then slated to be a few weeks away. Google has finally started rolling out the app sharing feature of Nearby Share for Android users.

First spotted by 9to5Google, Nearby Share now allows users to share apps from Google Play with the people around you with an Android phone, even without data or Wi-Fi connectivity. To use the new feature, head to Google Play on your Android phone, open the hamburger menu and select My Apps and Games. You should be able to see a new Share tab alongside other options like Updates, Installed, and Library. Clicking on the Share tab reveals a new notice that reads ‘Now you can send and receive apps with anyone nearby using Google Play. No Internet connection required.'

If you wish to send apps to someone nearby, click on Send. If you're receiving apps from someone nearby, click on Receive. When sending apps, you can select multiple apps at once and send in one go. Gadgets 360 was able to confirm this feature on a Samsung Galaxy Note 20 handset. It should roll out to all phones running on Android 6.0 Marshmallow and above.

Apart from this, Google is also reportedly working on a feature that will allow users to easily share their Wi-Fi passwords remotely. The feature is expected to use Google's Nearby Share and it may debut on Android 12. The feature's commit has reportedly been submitted to Android Open Source Project (AOSP) hinting at a launch in the future.