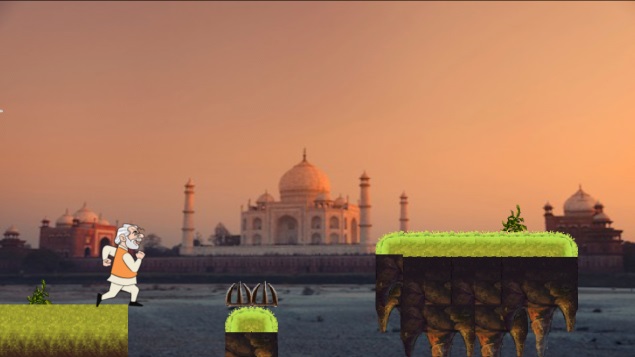 We've already seen Narendra Modi-inspired smartphones, and now it seems, other industries are capitalising on the politician's trending popularity, with a Modi-themed mobile game being announced, called Modi Run.

Modi Run, an Android platforming game, recently hit the Google Play store for free. It has been created by Dexati, a mobile app and game developer based in the US. The game has already been downloaded by about 50,000 Android users and is making rounds with Narendra Modi's fans.

The gameplay of Modi Run is based on the classic Mario series, not the Temple Run series as indicated by the name; here Modi's character is seen beating obstacles and collecting diamonds at various stages. Interestingly, the developer has named the stages after Indian states.

The first stage starts with Gujarat which is followed by Maharashtra, Uttarakhand, Rajasthan, Kerala, Karnataka, Andhra Pradesh, Bihar, Uttar Pradesh, Tamil Nadu, Assam and Madhya Pradesh. Modi in the game is also equipped with flying powers, which work by just flapping arms comically, enabling him to hop across a lengthy gap. The aim of the game is to reach the ballot and count the votes in BJP's ballot box.

To avoid major backlash, the developer has posted the disclaimer, "This game is not endorsed by Modi or BJP. This game is purely for entertainment made as Parody of Indian Elections."

Recently, the SmartNaMo Saffron One and SmartNamo Saffron Two hit ecommerce website Snapdeal for pre-order, devices that have admittedly been manufactured by Narendra Modi fans. Both the devices were listed on Snapdeal for a booking amount of Rs. 999. Do also check out our picture gallery of the SmartNaMo phones.