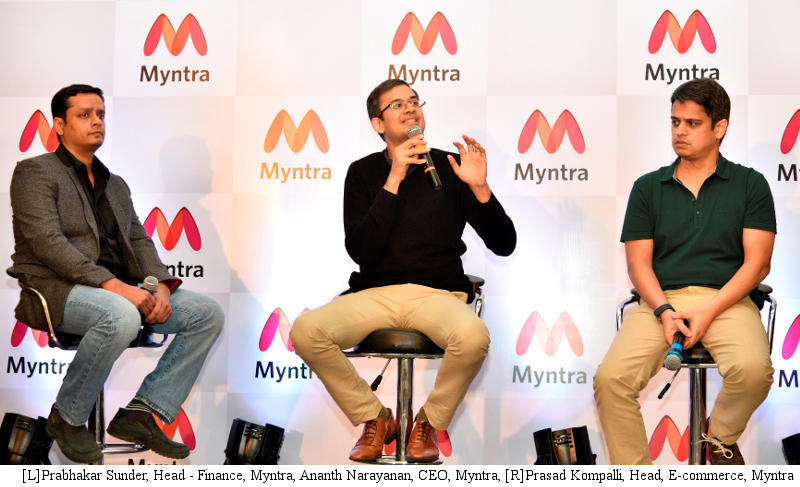 A GMV run rate projects performance based on a monthly or quarterly rate. For example, Myntra would have to perform at the same level for an entire year to have annual revenues of $800 million. In the fashion retail industry, seasonal spikes in performance are common.

Discounts have dropped by six percent, and supply chain costs reduced by five percent in the last quarter, said Myntra CEO Ananth Narayanan, adding that it is on the path to profitability, and hitting a $1 billion (roughly Rs. 6,800 crores) GMV run rate by FY 2016-2017.

"Our monthly average users is continuing to see healthy growth. as is the number of visits, which has almost grown to 12 a month. Customers come back for more, not just to shop but to take a look at the content we have created," Narayanan said.

In a Q&A session, Narayanan told journalists that while the spike in the annualised GMV growth rate is seasonal, the baseline has shifted upwards, in terms of monthly average users and daily average sales. Myntra sees eight million monthly active users, and ships over 50,000 products daily, the company said, with Tier II and Tier III cities accounting for 55 percent of the company's business.

Myntra's Style Forum, where consumers can go ask questions on fashion, has been a huge success, he said, with a million users visiting the forum last month. "The conversion rate is two and a half times, it leads to commerce much more naturally," he said.

In-house brands saw an increase in contribution in overall revenue to 20 percent in 2015, and the company wants to increase the contribution of these in-house brands to around 25 percent in see FY 2016. Myntra's fashion brand Roadster aims to clock Rs. 400 crores in 2015-16 and become a $100-million (roughly Rs. 680 crores) brand by end of 2016.

Myntra dropped its discount rate to 6 percent during the Diwali quarter, Prasad Kompalli, Head, eCommerce platform at Myntra said, but added that discounting won't go away entirely. "Fashion works in that manner, there are always going to be some discounts in the system," he said.