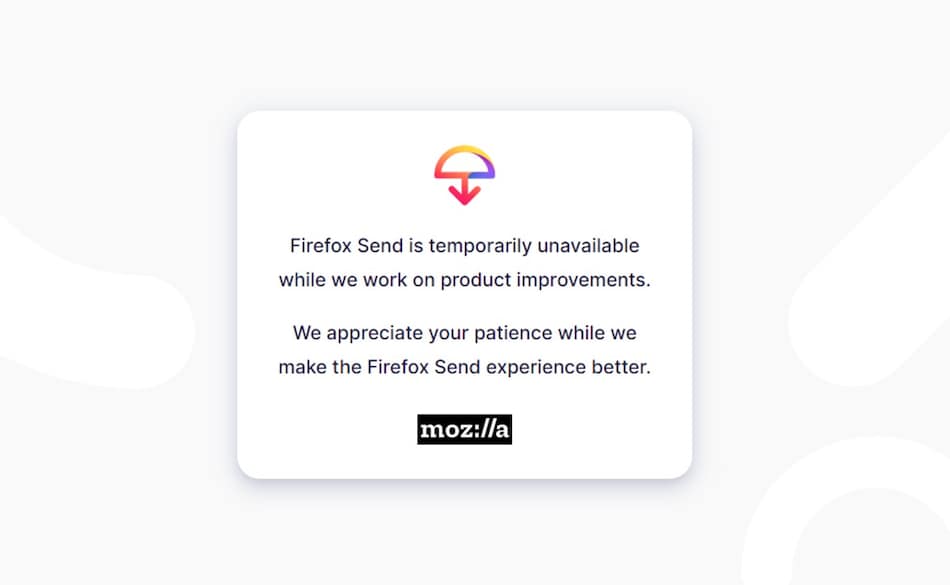 Mozilla's popular Firefox Send file sharing platform has been temporarily suspended after rise in reports of malware hosting. The service relayed the news through an announcement that reads, “Firefox Send is temporarily unavailable while we work on product improvements.” Users have recently spotted malware gangs like Ursnif (Dreambot) and REVil (Sodinokibi) using Firefox Send to host payloads of malware. The company looks to introduce a new ‘Report Abuse' mechanism before resuming the service once again.

ZDNet was the first to spot the temporary suspension of Firefox Send. Mozilla confirmed to the publication, “We will temporarily take Firefox Send offline while we make improvements to the product. Before relaunching, we will be adding an abuse reporting mechanism to augment the existing Feedback form, and we will require all users wishing to share content using Firefox Send to sign in with a Firefox Account.” While Mozilla didn't offer any clarity on when the service looks to resume, it vaguely says that it is ‘carefully monitoring these developments and looking critically at any additional next steps.'

Apart from taking the site down, Mozilla has also reportedly deactivated all of the Firefox Send links that may have been active. These extreme measures are done to mitigate any unethical ongoing operations that relied on the service.

Pointing out the big faults within Firefox Send, UK cyber-security researcher Colin Hardy is quoted by ZDNet to say that Firefox URLs are natively trusted within organisations, thwarting spam filters. It also saves cybercrime gangs from investing their own time and money into making their own file-hosting ecosystem, and the encrypted data further hinders malware detection. Hardy adds, "Send also has a Password protect feature, again making it easier to escape detection from perimeter devices."