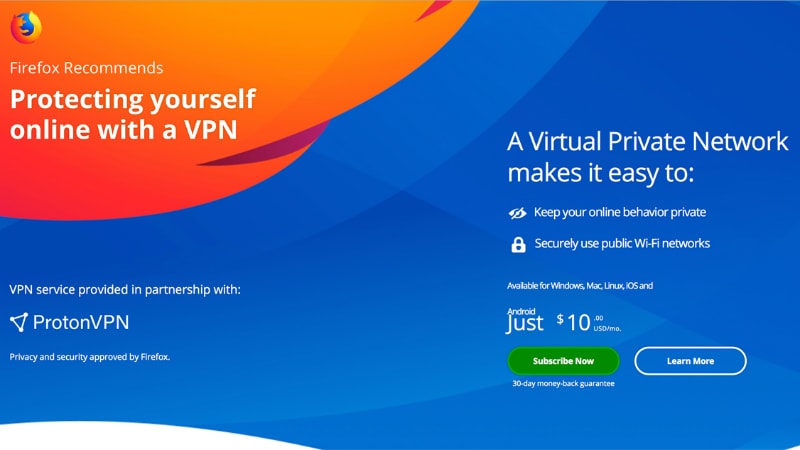 Mozilla has partnered with ProtonVPN AG to start selling subscriptions to ProtonVPN through its Firefox browser. The new development will be kicked off as an experiment with a small group of Firefox users in the US starting October 24. The ad to purchase a ProtonVPN subscription will be served through Firefox 62 on desktops, and the subscription will be available through the browser at a monthly charge of $10 (roughly Rs. 700). Apart from selling VPN subscription, Mozilla has updated its Firefox browser for Android devices with support for Picture-in-Picture video. The new release that comes in the form of Firefox 63 for Android also brings notification channels.

The ability to sell subscriptions through ProtonVPN through Firefox brings an additional source of revenue for Mozilla. However, the experience is to be piloted for a small group of users instead of making it available for the masses. This makes sense as the company probably needs to observe carefully the feasibility of the new model before bringing it as a public move.

Select users in the US who are browsing the Web on an unsecured network will see the ProtonVPN ad from the top-right corner of their screen. "Our team looked closely at a wide variety of factors, ranging from the design and implementation of each VPN service and its accompanying software, to the security of the vendor's own network and internal systems. We examined each vendors' privacy and data retention policies to ensure they logged as little user data as possible. And we considered numerous other factors, including local privacy laws, company track record, transparency, and quality of support," Mozilla wrote in a blog post while explaining why it selected ProtonVPN as the first advertiser on Firefox.

While Mozilla will collect the payments from Firefox users who prefer ProtonVPN subscription using payment services Stripe and Recurly, a portion of the proceeds will be shared with the VPN provider "to offset their costs in operating the service". The service, once subscribed, will be accessed through Windows, macOS, Linux, iOS, and Android. Moreover, Mozilla has highlighted that the VPN can easily be turned on or off, and the subscription can be cancelled at any time.

It is worth noting here that while Mozilla is offering ProtonVPN subscription at $10 a month, it is natively available through ProtonVPN's official website at $8 (roughly Rs. 600). The additional monthly charge of $2 is likely to help the browser maker enhance its revenues over time. Furthermore, ProtonVPN through a separate blog post suggests that there could be a plan to expand the ad-serving model for all more than 300 million Mozilla users globally over time.

This isn't the first time when Mozilla has considered a model to expand its revenues. The company previously started showing recommended articles from Pocket where some sponsored content could be served to generate some revenue from the product that is competing against Apple's Safari, Google's Chrome, and Microsoft's Edge.

Alongside started selling VPN subscriptions, Mozilla has brought Firefox 63 for Android that brings support for Picture-in-Picture video and notification channels. Users need to be on Android 8.0 Oreo or later to experience the Picture-in-Picture video that is limited to certain websites. All you need is to press the home button after visiting the supported website to watch videos on the floating window.

The updated Firefox for Android also brings the ability to recognise the operating system accessibility setting to reduce animation effects. There are also English from Canada (en-CA) and Ligurian (lij) in the form of new locales.

You can download the updated Firefox browser on your Android device by visiting Google Play. Alternatively, you can sideload its APK file directly from APK Mirror.

OnePlus 6T to Be Sold Offline via Reliance Digital Stores in India
Netflix Renews Matt Groening’s Disenchantment for Season 2, to Air in 2020, 2021