Mozilla has rolled out Firefox 24, the new iteration of its web browser for Windows, Mac, Linux and Android.

The desktop version of Firefox now offers a new scrollbar style for Mac users running OS X 10.7 or later. It also offers a new 'close tabs to the right' option that allows users to close all tabs that are to the right of the current tab. The option can be invoked by right clicking on a tab.

Users of Firefox's Social feature which allows access to certain features of social networking services like Facebook through the browser's UI, would now be able to tear-off chat windows to view them separately by simply dragging them out.

Meanwhile, Firefox for Android now comes with default support for WebRTC (Web Real-Time Communications), a new HTML5 API that enables real-time communication, such as video calling in the browser. The mobile browser now supports three WebRTC components, namely,  getUserMedia (gUM), which provides access to the user's webcam and microphone, PeerConnection, which enables calls from one browser to another, DataChannels, which establishes peer-to-peer data transfer between browsers.

Mozilla had deployed WebRTC on the desktop version of the browser with the release of Firefox 22, in June.

It's a welcome move as the WebRTC API doesn't require any additional plugins or software and companies like Google are also planning to embrace it for its Hangouts communication service. 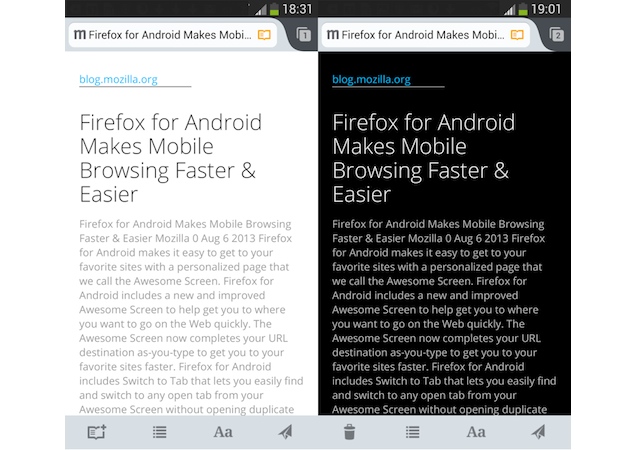 The Reader feature in Firefox for Android has also been updated to allow users to switch between serif and sans serif fonts. It also offers the ability to automatically switch to "dark mode" (dark text on a light background) or "light mode" (light text on a dark background) depending on the level of light in the room. The two modes can also be switched manually, though.  Long tapping the Reader icon on the URL bar now adds it to the user's Reading List. It's worth pointing out that content saved in the Reader is also available for offline reading.