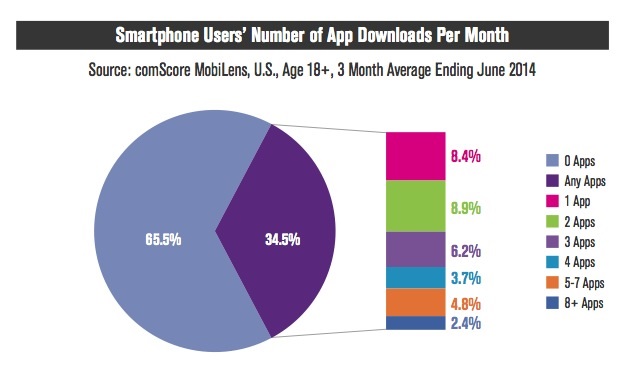 Most apps are free and even when these come with a price tag, the amount is nominal. Even then, people are not downloading them. Why?

According to a latest report by American Internet analytics company comScore, most US smartphone owners download zero apps in a typical month.

It may be because people just do not need that many apps. The apps people already have are more than suitable for their needs like Facebook, Google, Twitter, WhatsApp, Yahoo etc.

Only about one-third of US smartphone owners download any apps in an average month, with the bulk of those downloading one to three apps. comScore analysed and shared the data after tracking usag data of consumer aged 18 months and above for the 3 months ending June 2014.

"More than one-third of all U.S. smartphone owners download at least one app per month, the report said. "The average smartphone user within this segment downloads three apps per month, meaning that the average among the entire smartphone population comes out to slightly more than one."

The total number of app downloads is highly concentrated within a small segment of the smartphone population, with the top 7 percent of owners accounting for nearly half of all download activity in a given month, the report added.

Ahead of Emmys, Netflix Already Winning Online
China to Make Own Operating System to Take On Microsoft, Google