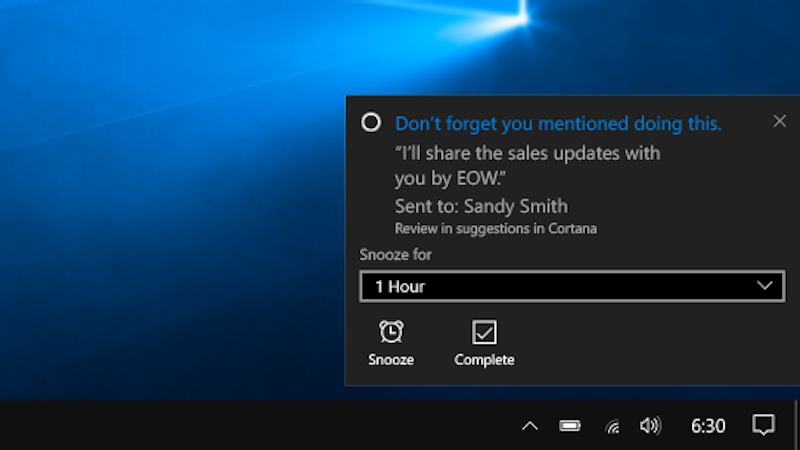 At least, to commitments made in email messages.

"Now, Cortana can help you remember things you've said you would do in your emails -- without you even having to ask," partner group program manager Marcus Ash said in a blog post.

"Cortana automatically recognizes when you make a commitment in email messages and will proactively suggest a reminder to you to follow through at just the right time."

An update to Cortana - Microsoft's digital assistant infused with artificial intelligence - enables it to recognize and make note when people promise in messages to tend to tasks, according to Ash.

"We've all been in the situation where we've promised to do something in email, like send your boss a report by end of day, or purchase tickets to the movies for your date night," Ash said.

"But the day goes on, emails pile up, and you quickly forget. Now Cortana has your back."

People interested in using the feature will need to sign in to Cortana and give permission for it to peek into emails, according to Ash.

Tech giants Amazon, Apple, Samsung, Google and Microsoft are all vying to develop the most sophisticated connected assistant.

Amazon's virtual assistant Alexa was one of the big winners at this year's Consumer Electronics Show, cropping up in TVs, cars, fridges and more.

Artificial intelligence is getting a foothold in people's homes, with personal assistants answering questions and controlling connected devices such as appliances or light bulbs.

Digital assistants already boast features such as reminding people of appointments entered into calendars and chiming in with advice to set out early if traffic is challenging.