Microsoft Visual Studio for Mac to Launch This Week 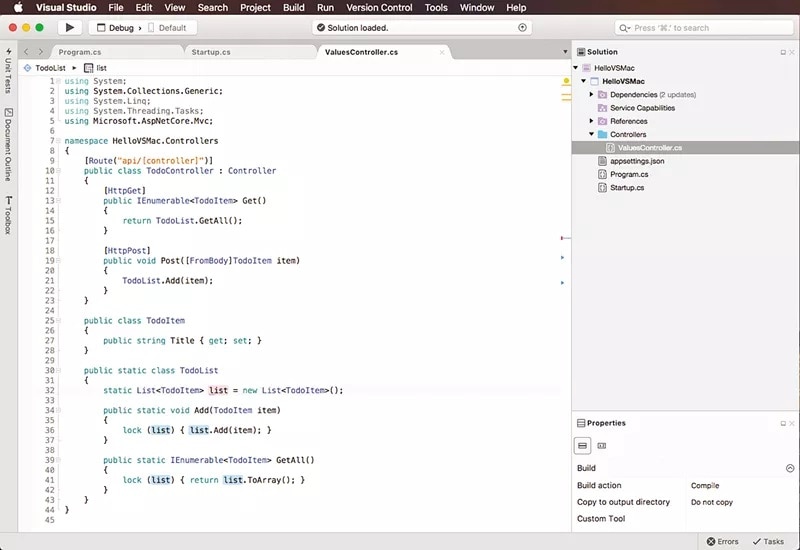 Microsoft is all set to introduce Visual Studio on macOS at its Connect(); developers' conference this week. The move will appeal to developers who use Mac PCs and who create software and services for multiple platforms. Visual Studio has long been Microsoft's preferred tool for coding and developing Windows software, but is also widely used in the creation of other platforms as well as online services. The move follows Microsoft's earlier release of the Visual Studio Code source editor for Mac, and complements Xamarin Studio, which it acquired earlier this year.

In a blog post on the Microsoft Developers Network spotted by The Verge, the company describes the move as an exciting one which will help the platform become a true mobile-first, cloud-first development tool for .NET and C#. Mac users should feel at home, since the interface is designed to be macOS native but has the same workflow and layout of the Windows version. Not all project types will be supported, but the ones that are use the same formats so that projects can be shared between users on different platforms with no need for conversion or migration.

Microsoft promises a high level of feature parity between the Windows and Mac versions of Visual Studio, including the Roslyn Compiler Platform for refactoring, the MSBuild engine, and TextMate for source editing. The C# and F# languages are supported, with the same compilers used by Visual Studio running on Windows. Debug engines, drag-and-drop design tools and form building tools with live previews are inherited from Xamarin. The company believes that users will primarily see Visual Studio for Mac as a tool to develop iOS, Android, Mac and backend cloud server software.

For those apps which tie in to backend cloud services, the Mac version of Visual Studio can be used to develop for the ASP.NET Core platform, and supports deployment to private data centres or hosting platforms like Microsoft's own Azure.

Visual Studio for Mac will launch as a preview at the Connect(); conference which kicks off on November 16.

Supermoon Can Be Seen Up Close at Nehru Planetarium
What are Micro ATMs, What they Do, and How They Could Help Solve the Cash Crunch