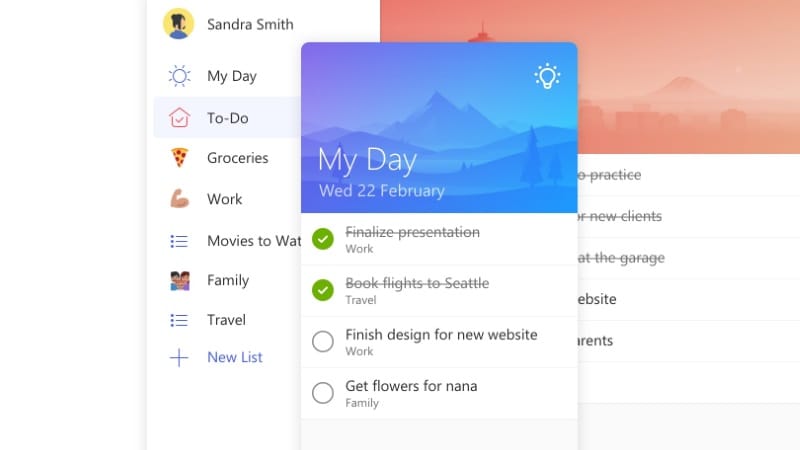 Microsoft on Wednesday launched a new to-do app called Microsoft To-Do. The Redmond-based company describes the app as "simple and intelligent to-do list" and the preview version of app has been made available on Android, iOS, and Windows 10. Just like company's OneNote application, Microsoft To-Do will also sync the data between mobile devices and computers and will soon allow users to get same content across multiple platforms.

Microsoft To-Do, as the name suggests, is a utility-based app that allows users to set reminders, keep track of activities, and create to-do lists. "It combines intelligent technology and beautiful design to empower you to create a simple daily workflow. Organize your day with To-Do's smart Suggestions and complete the most important tasks or chores you need to get done, every day," the app's description says on App Store.

Interestingly, the new app comes from the same team that earlier created Wunderlist, another popular to-do list application Microsoft had acquired back in 2015 in a spate of acquisitions that included Sunrise Calendar and Acompli. The company has also added an Intelligent Suggestions feature that allows users to receive ideas from the app on 'what's most important'. "Just tap the lightbulb, and you'll see any to-dos from the day before, what's due or upcoming, and other helpful suggestions based on To-Do's smart algorithm. Just add the ones you want to get done to My Day," the company said in an official blog post.

On Office 365 integration, Microsoft said, "To-Do is built on Office 365, which in coming months will enable the product to be even more useful in more places. Our first integration with Outlook makes it easy to stay on top of your Outlook Tasks from anywhere. It will automatically sync your Tasks with To-Do, and allow you to access and manage them across devices.