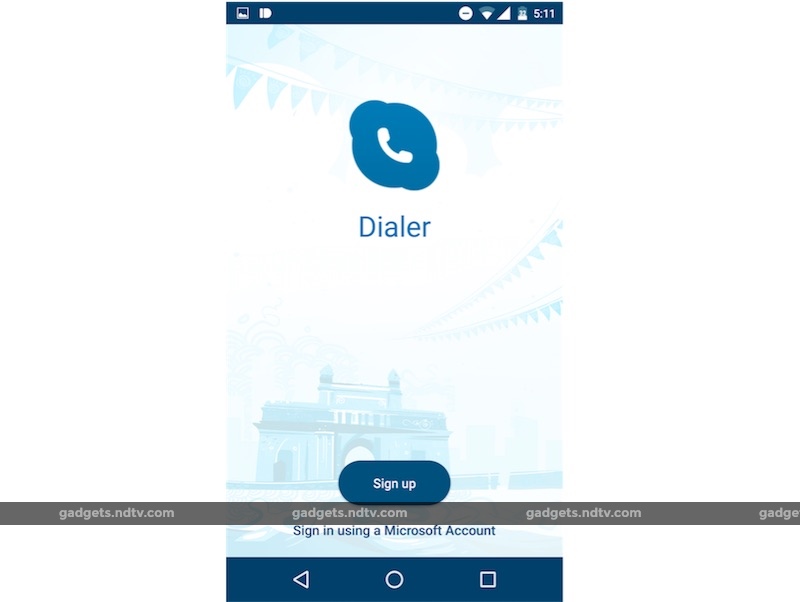 Microsoft is testing a new Skype voice calling Android app called Dialer, multiple sources have told Gadgets 360. The app has been developed by Skype team and is designed exclusively for the Indian market, the sources added. This ties in with the company's announcement of the start of closed beta testing of the India-specific version of Skype. As of now, the release time-frame for Dialer is set for the second week of December, two people familiar with the matter said.

Dialer is Microsoft's attempt to capture the markets that are bogged down by connectivity issues like slow and unreliable Internet access. According to one source, India is the testbed for the app and the company may later launch Dialer in other markets as well. Microsoft also has plans to release a Windows Phone (Windows 10 Mobile) client of the app early next year, said one person familiar with the matter who didn't want to be identified because the plans haven't been made public yet.

When asked for a comment on its plans for the Dialer app, a Microsoft spokesperson told Gadgets 360, "As part of the ongoing improvements to deliver the best experience possible to our users, we are always innovating and occasionally test out new features and functionality on small groups of users in different markets. If you live in India and have an Android phone and would like to get involved, sign up to our Pre-Release program via the Skype Community page. We have no specific news on product announcements planned in India to share today."

At this point, it is unclear whether Dialer will also offer video calling capability, but one of the sources said it will support video sharing in some format. The app works on 3G as well as slower networks (2G).

While everything we've heard leads to one thinking about the app as 'Skype lite', given the name of the app, Microsoft's Dialer could well be a replacement for the default dialler app that comes on your Android phone, with seamless Skype integration thrown-in.

Internet voice calling has quickly become one of the most favourite features among many Indian users. WhatsApp's voice calling feature, which the company rolled out this year, has proven to be quite popular in the country. Hike Messenger, an alternative to WhatsApp, recently added group voice calling ability. The app allows up to 100 people in a group to simultaneously talk to each other.

While these apps continue to bloom, Skype is starting to lose appeal, especially amongst the younger, mobile-first audience. Skype apps on Android and iOS are bloated compared to some of its competitors, and require more resources. The smaller, lighter Dialer app is ostensibly Microsoft's way of getting back into the game.

No, You Still Cannot Buy Dragon Age: Inquisition Officially in India
Twitter Will Lay Off Employees Next Week: Report