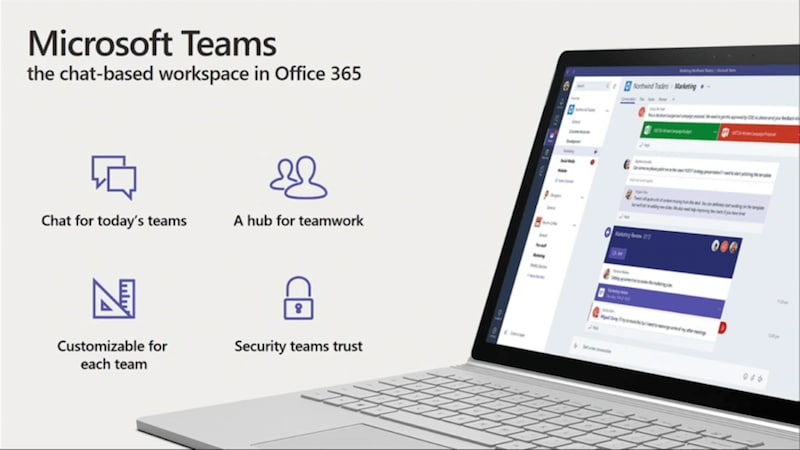 Microsoft unveiled a corporate team-chat service that works with its cloud-based Office and Skype products, aiming to take on Slack and Atlassian Corp.'s HipChat in a growing market.

The new product is "designed to facilitate real-time conversations and collaboration while maintaining and building up that institutional knowledge of a team," said Chief Executive Officer Satya Nadella. The product has team chat, private messages and voice and videoconferencing.

Big companies like Microsoft and IBM are showing renewed interest in the corporate-messaging market as customers flock to internet-based tools like Slack for setting up team communications, said Vanessa Thompson, an analyst at IDC. Microsoft relied on Office 365 and other products to rack up almost $10 billion (roughly Rs. 66,697 crores) in commercial cloud revenue for the fiscal year that ended June 30, and is adding services to draw in more customers.

"Microsoft is trying to get more airtime with customers that might want something to augment their existing investment in Office 365," Thompson said. "What we have started to see is a bunch of companies trying to attack the enterprise versions of WhatsApp and consumer messaging." IDC hasn't published a market size or forecast for the space, which it calls workplace application messaging.

A preview of the service, dubbed Microsoft Teams, is available now for Office 365 commercial customers in some versions. It will be generally available in the first quarter and will be included in all Office 365 Enterprise and small business versions.

Microsoft's product allows teams to add what it's calling Tabs, to quickly link to frequently used files and applications. These tabs can relate to Microsoft products like the OneNote note-taking program or to outside products -- the company said it's adding support for Zendesk and Asana soon. Teams can also bring in notifications from services like Twitter and GitHub. Like Slack, it also supports the usage of bots -- programs that chat with users to automate tasks.

It's not Microsoft's first foray into this area - the company paid $1.2 billion in 2012 to buy Yammer Inc., but hasn't been able to build up the kind of usage as Slack and HipChat. Slack raised $200 million at a valuation of $3.8 billion in April. The startup, which introduced its product in 2013, said it reached annualized revenue of $100 million over the summer and surpassed 1.25 million paid users. HipChat was founded in 2010 and acquired by Atlassian two years later. That company declined to break out specific numbers for the product.

Redmond, Washington-based Microsoft considered acquiring Slack, but the discussions never got serious enough to involve Nadella or the company's board, and it opted instead to build its own similar software, said two people familiar with the matter, who asked not to be named because the process wasn't public. TechCrunch reported Microsoft's potential interest in Slack in March.

In a very tongue-in-cheek acknowledgment of the competition, Slack took out a full-page ad in the New York Times Wednesday and posted a copy on its web site welcoming Microsoft to the field and noting that "all this is harder than it looks."

Bloomberg Beta, the venture capital arm of Bloomberg LP, is an investor in Slack.