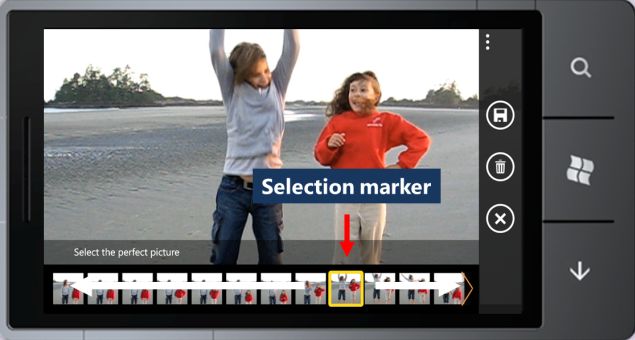 Microsoft has released a lens app for Windows Phone 8 devices that allows users to take multiple pictures in burst mode and select the best image among them. The app starts taking pictures even before the user presses the shutter and continues till a few seconds after the shutter has been pressed. The app has been developed by Microsoft Research, and is available as a free download on the Windows Phone Store.
After downloading it, users can either directly go to the app or access it from the lenses available inside the Camera app. They can either press the shutter button or tap on the screen to take pictures in burst mode and then select the best image after browsing all the shots by sliding the selection marker. While the selected image is stored in the Photos hub, the entire sequence can be seen again inside the Blink app by selecting the 'Edit' option in the menu.

The app is very similar to the Smart Shoot app that Nokia includes with its Lumia 920 and Lumia 820 phones. However, Smart Shoot also allows users to erase objects and select the best face pic among the shots. It's noteworthy that BlackBerry is also integrating a similar feature in the recently launched BB10 operating system. The HTC One X and Samsung Galaxy SIII also offer a burst mode.

Microsoft had announced lenses at the time of launching Windows Phone 8. They're essentially apps that plugin to the Camera app and extend the functionality of the phone's camera. These apps can be developed by Microsoft as well as by third parties. The Nokia Lumia 920, for example, ships with Bing Vision, Panorama, Cinemagraph and Smart Shoot lenses to cater to various shooting moods and requirements.