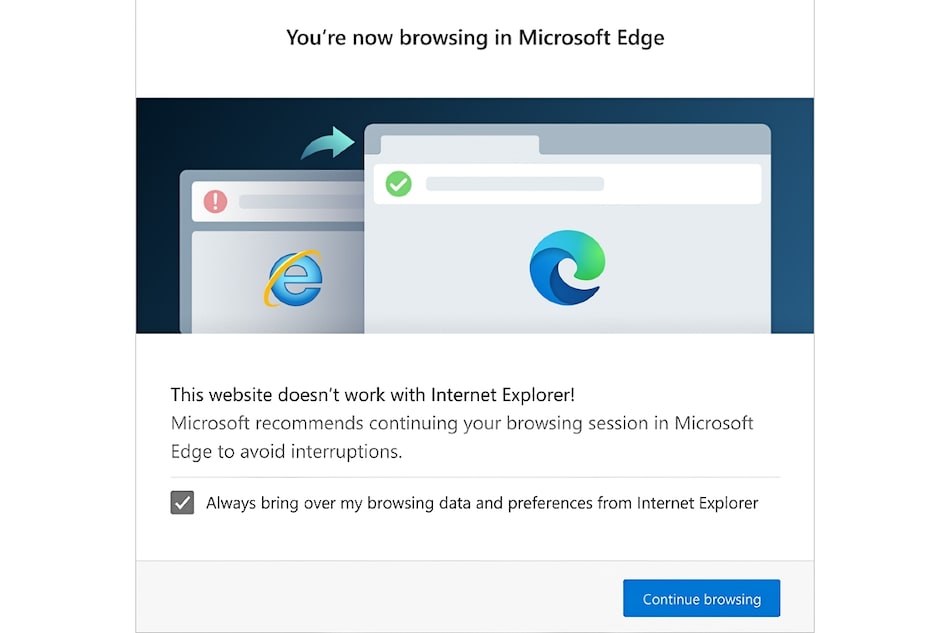 Microsoft will redirect users to Microsoft Edge from Internet Explorer when they try to access websites that are incompatible with the latter. Starting with Microsoft Edge Stable version 87 set to release next month, users will be shown a one-time dialog box that explains why they're getting redirected, after which their data will then be imported to Edge. Microsoft is also testing a new feature to improve the startup time of the Edge browser. Called startup boost, the feature will launch a set of Microsoft Edge processes in the background, so that Edge is available more quickly once launched.

Users being redirected to Microsoft Edge from Internet Explorer is a part of the company's plan to phase out Internet Explorer 11. Among the over 1,000 sites that users will be redirected from are popular ones such as Instagram, YouTube, Twitter, Yahoo Mail, and Hotstar.

After users give consent to open sites on Microsoft Edge after being redirected, their browsing data such as favourites, passwords, search engines, open tabs, history, settings, cookies, and the home page will be redirected from Internet Explorer to Microsoft Edge, along with their preferences.

Separately, startup boost, the new feature being tested by Microsoft, will enable Microsoft Edge to start more quickly when it is launched from the taskbar, desktop, and hyperlinks embedded in other applications. It will be an optional setting in Microsoft Edge 88.

The Microsoft Teams Web app will stop supporting Internet Explore by the end of next month, while the remaining Microsoft 365 apps and services will no longer support the browser starting August 17, 2021.