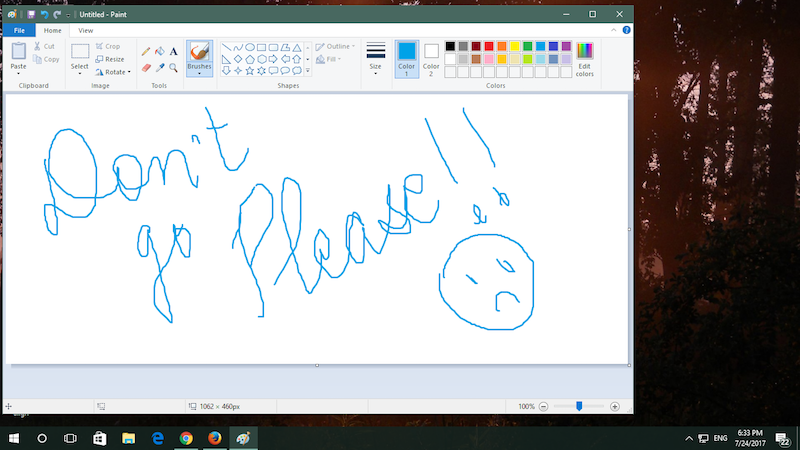 Microsoft Paint is something we grew up with. Since the 1980s, Paint has stood as one of the earliest tools that taught us how to draw, use different shape presets, make quick copy and paste jobs, or just scribble when we had nothing better to do. 32 years later, Microsoft is ready to take away a part of our childhood when it stops support for Paint with the release of Windows 10 Fall Creators Update.

Introduced in 1985 with Windows 1.0, Paint was one of the first graphics editors which became a household feature for Windows users. It was only by Windows 98 that one could start saving Paint files as JPEG. Apart from Paint, Microsoft has also added Outlook Express, Reader App, and Reader List to its list of "features that are removed or deprecated in Windows 10 Fall Creators Update." Paint falls under the deprecated column, which means that these apps will not be in active development and will likely be removed in future releases.

Update: Microsoft on Monday clarified that MS Paint is not going away, but will be made available as an optional download via the Windows Store.

Killing off Paint suggests that Microsoft wants to push users towards adopting Paint 3D, which was introduced in April with the Windows 10 Creators Update as a more professional editing software. Paint 3D gives users 3D image making tools along with the 2D tools. In fact, Microsoft's support page also mentions that the 3D Builder app will no longer be installed by default, urging users to use Paint 3D instead.

Microsoft's Paint software will be remembered for, among other things, its simple user interface that made it easy to create artistic content. Whether or not this move will push people to accept Paint 3D is something that will have to be seen once the Windows 10 Fall Creators Update rolls out.