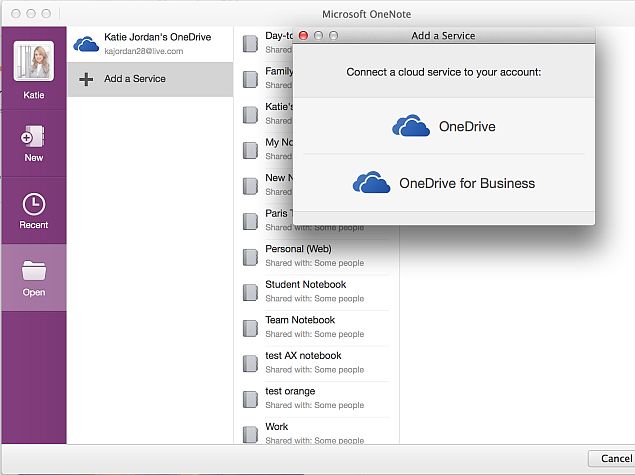 Microsoft on Tuesday rolled out an update for its OneNote service for Mac, iPhone and iPad with new features based on "customers['] top requests."

"We are thrilled to announce today four major updates for OneNote for Mac, OneNote for iPad and OneNote for iPhone," stated the official Microsoft Office blog post on Tuesday, listing the new features.

Access your work or school notebooks on your Mac stored on OneDrive for Business or SharePoint Online (on Office 365).

Open and insert files, including PDF files, into your notebook pages.

Specifically, the updated OneNote app for Mac now comes with the ability to let users access notebooks on OneDrive for Business and SharePoint Online (via Office 365). Microsoft adds that users can now open, sync, and create personal or shared project or class notebooks on OneNote for Mac.

Besides introducing the improved copy and paste feature that allows users to insert formatted content from other websites or apps to OneNote, Microsoft now also gives users of the OneNote app for Mac the option to send their notes not as both a pdf file but also in the message body.

Users of the OneNote app for iPad, iPhone and Mac can now insert and view files or attachments in their notebooks, including pdf files. This can be done via Apple's AirDrop feature also, if users want to drag and drop a file into the notebook. Microsoft adds that iPad and iPhone users can add images or documents via Mail or any other apps via the 'Open in OneNote' option.

Microsoft now enables users to access their password protected sections created on OneNote for Windows. Microsoft also says that the particular protected section will lock automatically after few minutes if the user is not working on it.

The Redmond giant adds that iPad, iPhone and Mac users can now rearrange their notes easily, by reordering or moving items with new easy-to-use interfaces for these functions. Microsoft says this is especially useful for collaborative notebooks.

The updated OneNote app is available for Mac, iPhone and iPad devices via the Mac App Store and App Store.